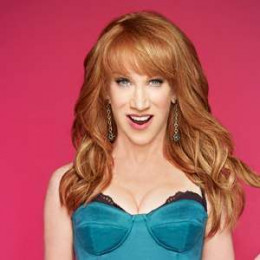 Kathy Griffin is an American actress and a comedian. She is doing well with her career and has won several prestigious awards including Primetime Emmy Awards.

Kathy Griffin Personal Life; Divorced her Husband after he Stole from Her

An American actress, comedian, writer, producer, and television host, Kathy Griffin is back with her longtime boyfriend, Randy Bick, a marketing executive. Her boyfriend is 18 years younger than her. After meeting in a food and wine festival in 2011, they started dating eventually.

The actress previously married, Matt Moline in 2001 but divorced soon in 2006. In several interviews, Kathy has vividly talked about why her marriage fell. According to her, Matt reportedly stole $72,000 from her.

She told Larry King in an interview that her ex-husband took out cash from her bank without her knowledge in the period of 18-months. Apparently, her ex used to take her atm card while she was sleeping and take out cash.

Upon finding out, she confronted Matt and he immediately admitted his guilt and apologized. Kathy, then, decided to go to a couple of therapy and see if they can make things work out but in the end, it all fell apart.

Kathy Griffin has an accumulated net worth of $20 million. Her acting and comic career are a major source of her income.

Kathy has been active in the entertainment industry for a long time because of which she is a recipient of numerous awards. For her show, Kathy Griffin: My Life on the D-List earner her a Primetime Emmy Awards.

Kathy Griffin was born on 4th November 1960 in Oak Park, Illinois under the birth sign Scorpio. She was born to mother Mary Margaret "Maggie" Griffin and John Patrick Griffin.

Kathy Attended Triton Junior College in River Grove, Illinois for one semester. She began performing as a standup comedian and also appeared as a guest star on several television shows. Griffin has released six comedy albums, all of which received Grammy Award nominations.

For all the latest biography on your favorite artists, make sure to follow MarriedWiki!!!

She was previously married to Matthew Moline in 1999 but they did not continue their marriage relationship and they divorced in 2006.