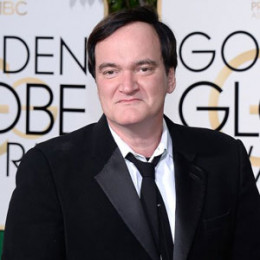 Academy Award-winning screenwriter, Quentin Tarantino is famous American director and actor, best known for his satirical, nonlinear storyline in movies along with specialization of the aestheticization of violent movies. He is currently one of the best directors of the generations. He's received huge appreciations for his works but at the same time he's been criticized other hand, he was highly criticized for excessive violence in his works. Tarantino debuted his career from the movie, My Best Friend’s Birthday which was later renamed as True Romance after its destruction in a lab fire. His independent career started with the release of Reservoir Dogs. Along with both critical and commercial success for which he earns an impressive net worth he has also written several books from where he collected an eye-catching amount. Tarantino is not married yet. But he is happily engaged with his longtime girlfriend, Daniella Pick.

Tarantino is American and as far as his ethnicity is concerned, he is of mixed ethnicity as his father is of Italian descent and mother of Irish ancestry. Tarantino is the son of Connie McHugh and Tony Tarantino. He has four siblings- Edward James Tarantino, Ron Zastoupil, Ronnajean Tarantino and Tanya Marie Tarantino. From the very early age of 4, he became passionate about movies.

His father left his family before his birth. Tarantino moved to Los Angeles with his mother in 1966 after his parents’ divorce. Soon after they shifted, his mother remarried to Curtis Zastoupil, a musician. His stepfather and mother used to encourage his love for movies and was even allowed to watch adult content movies. In 1973, his mother divorced his stepfather and received a misdiagnosis of Hodgkin’s lymphoma. After his parents’ separation, he started living with his grandparents in Tennessee.

His mother’s next husband, with whom she lived together for eight years, used to take him to the movies. At the young age of 14, he wrote his first work, Captain Peachfuzz and the Anchovy Bandit (screenplay) which was based on Hal Needham’s film, Smokey, and the Bandit.

At the age of 15, Tarantino shoplifted Elmore Leonard’s novel, The Switch from a Kmart for which he was grounded. He was only allowed to attend the Torrence Community Theater where he participated in several plays including Romeo and Juliet and Two Plus Two Makes Sex.

Quentin Tarantino worked in various movies and TV series as an actor, director, producer, and screenwriter as well.

In the 1980s, Tarantino met Lawrence Bender ( famous American film producer) in a Hollywood party, who encouraged him to write screenplays. He made his Hollywood directorial debut in 1987 from the movie, My Best Friend’s Birthday. The final reel of the movie was destroyed in a lab fire which was later named True Romance. A year later, Tarantino gave a guest appearance in the TV series, The Golden Girls.

After the destruction of his first movie, he began his career as an independent filmmaker in 1992 from the movie, Reservoir Dogs. The movie was one of his career’s first hit which was also listed top as the "Greatest Independent Film" of All Time by Empire.

Soon after the success of the Reservoir Dogs, he again released his second hit movie, Pulp Fiction that became a blockbuster across the country. The movie alone earned over $108 million at the box office, becoming the first independent movie to be that successful.

He was nominated for various prestigious awards and won some of them as well. As of the 1990s, he received his first paid writing assignment after Robert Kurtzman who hired him to write a script for the movie, From Dusk Till Dawn. In 1997, he directed a movie, Jackie Brown after which he took a break from the film and started working in Broadways and theatre.

He later directed, wrote, produced and acted in various movies and TV series. Some of his popular works include:

Tarantino’s latest movie include 2015’s The Hateful Eight where he worked as a director, writer, and an actor. After a long break, Tarantino is currently working in his movie, Helter Skelter which will be releasing in 2019.

Quentin Tarantino has been nominated for various prestigious and reputable awards and has won more than a hundred awards so far. Out of 158 awards nominations, he won altogether 117. Some of his won awards include:

Some of his other lifetime honors include Order of Merit of the Hungarian Republic(2010), Lifetime Achievement Award by Roman Film Festival in 2013, 2011 Honorary Cesar By Academie des Arts et Techniques du Cinema and so on.

Quentin Tarantino has an estimated net worth of $100 million. Some of his movies that made a whopping collection at the box office include:

Tarantino has also earned huge amount from his books. Some of which include:

Tarantino owns a mansion called, ‘Quentin Tarantino Mansion’ worth $7 million. He has a collection of luxury cars like- Porsche which costs around $46,475) and $25k worth Ford Mustang.

Tarantino also has a RIX777 boat worth $2 million. In 2010, he bought a historic movie theater, New Beverly Cinema.

Quentin Tarantino has never been married. He got engaged with his longtime girlfriend, Daniela Pick in 2017. His wife to be is an Israel native pop singer. The pair encountered each other in 2009 during the promotion of his movie, Inglorious Basterds.

Soon after the first meeting, the couple started dating despite the huge age difference. In 2012, the couple split for almost four years and came back together in 2016. He spoke in one of the interviews about his marriage plans,

‘I’m not saying that I’ll never get married or have a kid before I’m 60. But I’ve made a choice so far, to go on this road alone Because this is my time.’’

"They got married in an intimate and private wedding with close friends and family in their place in Los Angeles."

"Daniella wore a white slip dress and her hair pulled up in a bun with a diamond headband. She held a bouquet of white roses. Quentin wore a dark suit and tie."

Quentin Tarantino was also involved in several controversies throughout his career. For his uncontrollable temper, he was highly criticized in those days. Some of his controversies include:

As per Tarantino, "Violence is one of the most fun things to watch.’’ He also added that he did not believe that violence in movies inspires the real-life violence to support his statement. He expressed that he was annoyed by the discussion linked to atrocities and violence in the movies.

Tarantino was questioned after he used a racial epithet, nigger in his movie, Jackie Brown. Director Spike Lee highly criticized the word whereas another A-list actor, Samuel L. Jackson responded the criticism as,

‘’I don’t think the word is offensive in the context of this film … Black artists think they are the only ones allowed to use the word. Well, that’s bull. Jackie Brown is a wonderful homage to black exploitation films. This is the good film, and Spike hasn’t made one of those in a few years.’’

Tarantino again came to controversy after he used racial epithets and depiction of slavery in his movie, Django Unchained. The critic, Lee again criticised the movie and says,

‘’All I’m going to say is that it's disrespectful to my ancestors. That's just me ... I'm not speaking on behalf of anybody else.’’

In 2016 during the 73rd Golden Globe Awards, he was criticized after using a word, ghetto.

Tarantino commented on ‘police brutality in the United States during a Black Lives Matters rally in October 2015. After such comment, the police pledged to boycott the movie and also encouraged another member to not work at the movie’s premiere.

The same movie’s copy was leaked by Gawker Media before its release in 2014. Tarantino later filed a lawsuit against them and also demanded the compensation of $2 million.

On 18th October 2017, Tarantino spoke about sexual allegations and harassment against the producer, Harvey Weinstein in an interview. He also admitted that he knew about the harassment since the mid-1990s, when his then-girlfriend, Sorvino told him about the shameful experience with the producer.

Later, he confessed that he felt ashamed for not taking a strong stand against such allegation.

In an interview with The New York Times, actress, Uma Thurman claimed that Tarantino ignored her allegations of sexual misconduct against the producer, Weinstein in the Savoy Hotel.

Not only this, but she also told about her serious neck and knees accident after she performed her own stunt. However, Tarantino confirmed that he did not force her to do the stunt and it was just an accident.

Tarantino once again came to controversy after he addressed the 13-year-old girl as, ‘’party lover’’ who ‘’wanted to have it’’ while he discussed the Roman Polanski sexual abuse case.