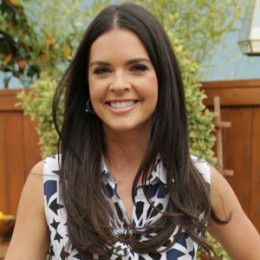 Katie Lee was born Katherine Lee on 14 September 1981 in Huntington whereas she grew up in Milton, West Virginia. She developed an interest in cooking at an early age of 4.

Lee graduated in journalism and food science from the Miami University in Oxford, Ohio. While in University she became the member of Kappa Alpha Theta. She spent a semester at the British Institute.

Katie began her career working in several restaurants, gourmet food, and wine stores. She served as the house fishmonger in 2003 at Jeff and Eddy’s Restaurant. Later she made a foodie website OliveAndPeach.com along with Aleishall Girard in 2005.

She got recognition after appearing in the popular cook show Bravo‘s Top Chef. In 2010 she appeared on a show Top Chef Stars as a guest judge. Furthermore, she became a judge on the show Iron Chef America in 2007 followed by Beat Bobby Flay in 2016.

She appeared on Wine Library TV, the video blog alongside Gary Vaynerchuk in 2009. Likewise, she made her appearance in an array of shows like Rachael Ray Show, Martha, Today, The Early Show, Fox News and many others. She is the co-host of the talk show The Kitchen and Beach Bite with Katie Lee.

After earning a name as a chef, Lee started writing a book about food. Her first cookbook The Comfort Table was published by Simon & Shuster. Her second book The Comfort Table: Recipes for Everyday Occasions released in 2009. She also wrote a novel Groundswell in 2011. She writes for magazines such as Hamptons magazine, Gotham and the Huffington Post.

Besides that, Katie became the member of the Feeding America Entertainment Council. She sat the Council of Chefs for Humanity and volunteered for Les Dames d’Escoffier.

The 36-year-old Lee was once a married woman. Billy Joel is the ex-husband of Katie. The duo exchanged their vows on 2 October 2004 after a year of dating.

Billy is an Award-winning singer and songwriter. The couple met at the rooftop bar at The Peninsula hotel in New York. Lee is the third wife of Joel. They filed for a divorce in 2009 which was finalized in 2010.

After a long time of the divorce, Katie was seen hanging out with a mystery man earlier this year. She hasn’t disclosed much information regarding the man who could be her alleged boyfriend. As of now, Lee is possibly single life. She spends most of her time in her organic garden and traveling.

As a cookbook author, chef and novelist Katie earns a lucrative amount from her career. Her current estimated net worth is $10 million. Seeing the post on her social media she certainly has maintained a high living standard.

Billy Joel is an American singer-songwriter and pianist. He is a six-time Grammy Award winner. He is the ex-husband of Katie Lee. They tied the knot in 2004 whereas divorced in 2010.