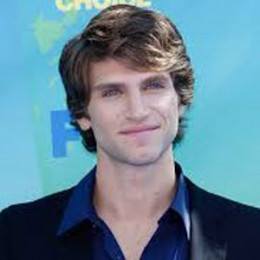 Keegan Phillip Allen, better known as Keegan Allen, is an American actor. He is best known for his role Toby Cavanaugh on the teen drama mystery thriller, Pretty Little Liars. He is also a photographer, author, and musician. His girlfriend is a model, Ali Collier, since 2015.

Keegan Allen was born on 22nd July 1989, California, U.S. He is a son of Philip R. Allen, actor and Joan Snyder Allen, a painter/artist. At the age of nine, his parents divorced so he started living with his cousin sister. He is a Jew.

Later, he stayed with his mother and step-father and moved to Los Angeles. He is the brother of Debbie Allen and Kim Allen.

From early days, he was passionate about photography, cinematography and other roles behind the camera. He got his first role at the very young age of 13 in an Animal Planet series.

The same year, he portrayed the recurring character of Toby Cavanaugh in an American teen drama mystery thriller, Pretty Little Liars. Till now, it has over 79 episodes in 4 seasons. He also won Teen Choice Awards for Best Choice Summer TV Star: Male in the year 2013.

After playing few TV drama series, he was cast in the American drama movie, Palo Alto, directed and written by Gia Coppola. The movie is based on James Franco’s short story collection Palo Alto (2010). He has also played few of the movies such as The Sound and The Fury, King Cobra and In Dubious Battle.

Keegan was in a love relationship with Skyler Samuels from 2011 to 2012.

Currently, Keegan is dating model, Ali Collier since 2015. The couple is actively sharing the beautiful moments they spent on their Instagram account.

Keegan has an estimated net worth of $2 million dollars from his career in acting in both TV and film industry.