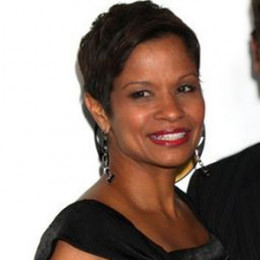 Keisha Chamber, a former model agency booker is a loving wife of the widely recognized actor Justin Chambers. She is a person who set her priorities towards her family rather than anything else. She is happily married to Justin Chambers since 1993. The duo is proud parents of five children, a son, and four daughters.

Keisha Chambers was born and raised in the USA. She is American and belongs to mixed, Hispanic and Caucasian descent.

After completing her education Keisha worked as a model agency booker. She continued her career for several years. She took a final leave from her work after she got married. Now she is a homemaker. She is busy looking after her children and being a responsible mother.

In 2007, Chamber along with her husband and daughter appeared in American Music Award. She also went to Victoria’s Secret Fashion Show with Justin in 2016. The same year she also attended Annual Primetime Emmy Award held in Shrine Auditorium Los Angeles, California.

Being the wife of the Hollywood star Keisha shares a great fortune with her husband. She earned quite a decent amount while working as model agency booker. Her net worth isn't revealed yet but it is assumed to be in millions of dollars.

However, her husband, Justin Chambers has estimated net worth of $4 million.

Keisha married her longtime boyfriend Justin Chambers in 1993. Her husband Justin Chambers is a wide known actor. The duo dated for almost a year before they exchanged vows. They first met when Keisha worked as a modeling agency while Justine was modeling for Calvin Klein Ad Company.

The couple is the proud parents of the five children. They have one son Jackson and four daughters Eva, Kaila, Maya, and Isabella. Her family owns a beagle and two rescued dogs.

Isabella Chambers is an elder daughter of Justin Chambers and Keisha Chambers. She was born in the year 1994.

Maya is the twin of Kaila. Both are the daughters of Justin and Keisha. They were born in the year 1997.

Kaila is the twin of Maya. Both are the daughters of Justin and Keisha. They were born in the year 1997.

Eva is the youngest daughter of Justin and Keisha. She was born in 1999.

Jackson Chambers is the only son of Keisha and Justin. He was born in the year 2002.