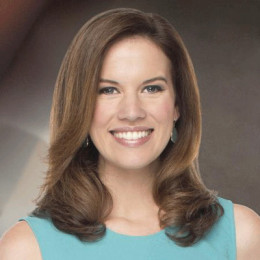 Kelly Evans was born on July 17, 1985, in Hartford, Connecticut, the USA. She was raised in Lexington, Virginia, the USA along with her sister.

Soon after completing her graduation, Kelly Evans started her career at Wall Street Journal in 2007. Then she worked at Global Economics Bureau as a reporter.

Later, she worked for the “Ahead of the Tape” column and an anchor for “News Hub”. Apart from that, she was a guest on various news programs like Fox News, CBS, and Russia Today before joining CNBC.

In 2012, Evans assigned CNBC in the CNBC Europe’s London, England headquarters. After a year, she shifted in the CNBC’s headquarters in New Jersey as a co-anchor for Closing Bell.

Kelly Evans is one of the prominent TV anchors, she has an estimated net worth of $2.5 million which she accumulated from her TV career. She earned more than $500k per annum.

Kelly Evans is a married woman, she tied the knot to her longtime boyfriend Eric Chemi in April 2017. But due to her secretive nature, she hasn't revealed much about her husband to media. The duo first welcomed their child, a son in July 2018.