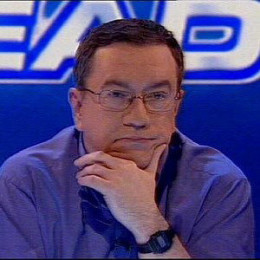 Television personality and quiz player, Kevin Ashman is widely known for Eggheads and other TV quiz shows. He made his first major television quiz success on "Fifteen to One”. He has won most of the top-level quiz tournaments and has taken part; among them are several World and European Championships.

The popular English quiz player, Kevin C. Ashman was born on November 2, 1959, in Winchester, Hampshire. He belongs to the white ethnicity and holds British nationality.

He attended St Bede's Primary School and Peter Symonds Grammar School/College. Later, Kevin completed his graduation from the University of Southampton with a BA degree in Modern History. He became interested in quizzes since his mid-twenties.

Ashman had his first television quiz success on Fifteen to On in 1989. In 1995 he won  Mastermind, scoring 41 points with no passes in his heat, which remains a record of that day. He later became the champion after winning the final with the subject Zulu War and the following year he won Brain of Britain, scoring 38 in his semi-final.

Besides this, he was a Question-setter for Brain of Britain from 2002 to 2006. He was even competed on the British quiz show Eggheads, teamed up with other quiz champions. He has won many national and international quizzing championship.

Kevin is very secretive about his personal life and that might be the reason he never talked much about his private stuff to the public, however, it is said he is a married man and had a happy family.

Considering his amazing career, it might be sure his net worth is around $1 million, but the exact figure is still under review.