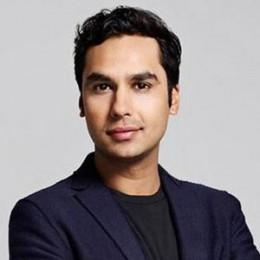 Kunal Nayyar is an Indian actor best known for his portrayal of astrophysicist Rajesh Koothrappali in the TV comedy series The Big Bang Theory. He is also a loving husband of Miss India 2006, Neha Kapur.

Kunal Nayyar is the son of Punjabi parents and hails from Hounslow, London. He was born on April 30, 1981, and grew up in New Delhi India.

Nayyar went to St Columba’s School in New Delhi. He used to play badminton and played for the school team. Nayyar attended the University of Portland in Oregon and took up an acting class while attending the University and participated in American College Theater Festival. Pursuing his interest in acting, he went to Temple University in Philadelphia, Pennsylvania and earned a Master degree of Fine Arts in acting.

Kunal began his career working on American television ads and playing on the London stage. He then went on to star in several hit movies. He came to the limelight when he performed in Huck & Holden, the West Coast production of Rajiv Joseph’s play in 2006. He won the Garland Award for Best Male Lead in a Play of the West Coast. He then started to write a play entitled Cotton Candy collaborating with Arun Das. The play premiered in New Delhi.

Afterward, Neyyar appeared on the CBS drama NCIS as a guest role. He made his break through when he landed the role in The Big Bang Theory as astrophysicist Rajesh Koothrappali. It was recommended by his agent to audition for the part.

In 2011, Kunal made his appearance in the show Tribute to Nerds as a co-host alongside Simon Helberg at the comedy festival Just for Laughs. He also lent his voice in Ice Age: Continental Drift in 2012. He made his film debut the same year with Dr. Cabbie produced by famous Bollywood star Salman Khan. In 2015, he featured in an off-Broadway production, The Spoils. The play was written and starred by Jesse Eisenberg. In September 2015, Nayyar published a book, Yes, My Accent is Real which is all about his career journey. Furthermore, he voiced in DreamWorks animated movie Trolls in 2016.

Kunal is a married man. He tied the knot with Miss India 2006, Neha Kapur in December 2011.  The couple met at a party in the bar through their mutual friend. They eventually fell in love with each other. The duo is living a blissful life with full commitment towards each other in Los Angeles.

Nayyar is an accomplished actor. He was ranked third on the list of World’s Highest-Paid TV Actors for 2015. He earned $20 million at that time. As of now, he holds the jaw-dropping net worth of $45 million. He charges $800 thousand per episode.

The Beautiful wife of Kunal Kayyar Neha Kapur is the model, actress, and former beauty queen, Miss India 2006. She also represented her motherland India at the Miss Universe.