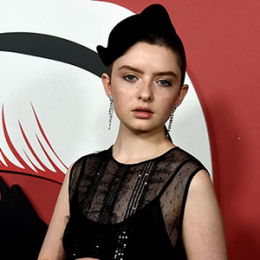 One of the famous and young nonbinary celebrities of the Hollywood, Lachlan Watson is bold by nature who never hesitates to speak about their sexuality in public. The young star rose to fame after their appearance in the Netflix's TV series, Chilling Adventures of Sabrina.

What Is Lachlan Watson's Sexuality?

Lachlan Watson who portrayed the role of gender non-binary character Theo Putnam in Chilling Adventures of Sabrina identifies themselves as a pansexual and genderqueer who uses they/them pronouns.

who tf you think u talkin to

The rising star told that it helped them to tell their own story. They said,

''I think that’s been very nice to be able to almost tell my own story through Susie a little bit.''

Watson found interesting to play such a character. They expressed,

“Honestly, it was a little refreshing to be a queer character [and] not be confined to a linear path where ‘oh, the character gets bullied and does research and oh, now they came out.''

''It was nice to live in that ambiguous world where Susie can really just be Susie and figure out what they meant without really being pressured to come out and label themselves just yet. That changes a little bit in season two, but we’ll have to wait and see what happens with that.”

Lachlan never hesitates to speak in public about sexuality. In November 2018 on a Netflix-produced talk segment, What I Wish You Knew: About Being Nonbinary, they discussed about gender identity with some nonbinary celebrities including Liv Hewson, Jacob Tobia, and Shica Raichandani.

The bold actress is not dating anyone and is possibly single as of now. The star seems to be more focused on her career rather than focusing on some serious relationship.

What is Lachlan Watson Up To Now?

Lachlan Watson, a non-binary film star donned a floral kind of dress styled by herself and her mom posing for a met gala challenge on 3 May 2020 at Raleigh, North Carolina. Similarly, on 2 May she featured on the cover page of a newsletter named SELF SHOT SALTY by Lachlan herself and her mutual muse.

Watson, a philanthropic young actor shared her joy being nominated for DAZED100. Lachlan addressed, this year she'll pitch an idea for the new DAZED100 ideas fund and her plan is to gibe half of the cash to the unheard and to the fund an entirely DIY album and tour with her shiny new musical endeavor.

How Much Is Netflix Star, Lachlan Watson's Net Worth?

Lachlan Watson has an estimated net worth of not less than $200 thousand. Watson is making a huge amount from their acting career.

rusie comin at you with the sideye

The actress is now working in the Netflix's TV series, Chilling Adventures of Sabrina with Kiernan Shipka, Ross Lynch, and Gavin Leatherwood. Watson is definitely earning a good salary from their role in the series. Moreover, Netflix's actors make an average salary that ranges from $47593 to $60635.

Check out the interview with Lachlan Watson where she talked about their nonbinary character!