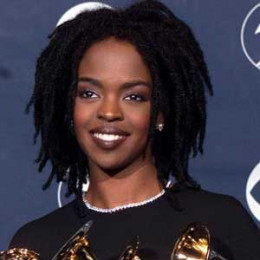 Lauryn Hill is an African-American Grammy winner hip-hop singer who debuted in the music industry with her former band Fugees. The band released their album "Blunted" in 1994 which did not do well but their second album "Score" was a super hit and sold 17 million copies. As for her solo career, her album "Miseducation" won five Grammys and sold over 12 million copies. Hill is known for her versatility and earned lots of income by doing album tours.

Lauryn Hill was in a relationship with Rohan Marley son of late reggae legend Bob Marley for 15 years.

Lauryn Hill was born Lauryn Noelle Hill on May 26, 1975, in East Orange, New Jersey, United States. Since she belonged to a music-oriented family she had an interest in music from a small age.

Both of her parents sang and could play musical instruments. She grew up with her brother Malaney who was born in 1972 listening to records from Aretha Franklin, Gladys Knight, Curtis Mayfield and Stevie Wonder. 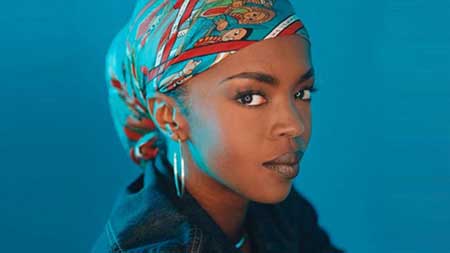 She wanted to be an entertainer at an early age and first sang when she was 13 on Showtime at the Apollo. That time people weren't liking her singing which upset her but her mom encouraged her to continue.

She attended Colombia High School where she used to do cheerleading and enrolled in violin classes. She was in the gospel singing group and was good in academics as well. Her singing and songwriting talent, later on, made her huge in the industry.

Lauryn Hill is professionally a singer who was a member of the band Fugees and gave many hits while with them. She went on many tours in her career as a performer. In 1996, she did a Smokin' Grooves Tour for a year and in 1999 did her solo album Miseducation's Tour.

In 2012, she did a tour with her co-member from her band Fugees which was called Life is Good/ Black Rage Tour and Small Axe Tour in 2015. Her 2018 tour is The Miseducation of Lauryn Hill 20th Anniversary World Tour where she performs the hit track of her album. She will perform in many cities of the United States like Atlanta, Las Vegas, San Diego, Phoenix and many more.

Hill first started her career with the trio band named Fugees which included her friends Wyclef Jean and Pras Michel. They were high school friends and Jean was Michel's cousin who firstly sang in local showcases and participated in talent shows which gave them some recognition.

Hill used to sing songs at that time but eventually, learned to rap being inspired by some legendary rappers. When she was just 18, the band released their first album Blunted which didn't do well. The group later released their next album named Score in 1996 which was a blockbuster and sold over 17 million copies.

The success of the album brought them fame and each individual of the group was into the limelight. Jean a member of the group went on to record his own album and he was regarded as the main shining light of the group. Hill wasn't really happy and knew she was better than Jean so to prove herself she went on to release her own solo album and started recording in 1998. 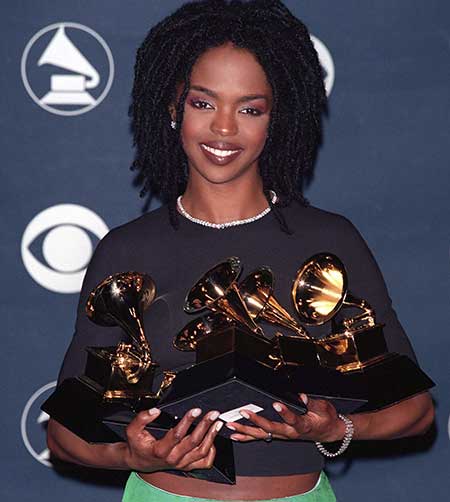 Later on, her album Miseducation was released when she was 23 and it sold over 12 million copies. The specialty of the album was that it was a combination of rap, neo-soul, reggae and won her five Grammys for Best Album of the Year and Best New Artist. With a sale as big as that she gained lots of media attention and went on many tours. She grossed over $40 million from touring, merchandising, advances, royalties and earned a net $25 million.

The album debuted on the U.S Billboard 200 at rank No. 1. and it's singles Doo Wop ( That Thing), Everything is Everything and Ex-factor became a huge hit. She won several other awards and could be seen in every other magazine covers. Her second album named MTV Unplugged 2.0 which was recorded in 2001 wasn't that much of a hit like her first solo debut album. Hill then decided to take a break from singing after her album release and disappeared.

Hill started acting when she was 17 as she was offered to play at the daytime soap named As The World Turns in 1991 and after two years, was cast in Sister Act 2: Back in the Habit in 1993. Due to her success, she was offered lots of movie projects but she declined as she didn't want to be involved in movies at that time.

She was offered to play in Charlie's Angeles and also in The Bourne Identity with Brad Pitt. Hill finally agreed to play in the movie which was a biography of Bob Marley and she had to play his wife Rita.

She has starred in movies namely Restaurant, Hav Plenty and Concerning Violence. In Restaurant she portrayed Leslie and in Hav Plenty, she played the role of Debra in a cameo role. She, later on, starred in Toni Morrison's movie Beloved but dropped out of his since she was pregnant.

Hill disappeared after that and couldn't be seen in the entertainment field. Her closed ones still say that if she had stayed and not left she would have been a greater star like Jennifer Lopez and Madonna.

Lauryn Hill is estimated to have a net worth of $2 million according to The Richest but Celebrity Net Worth states it to be $8 million. In 1998, she earned $25 million from touring and her album sold up to $8.7 million. From her 2002 album MTV Unplugged No. 2.0, she earned $1 million.

She grossed over $40 million from touring, merchandising, advances, royalties and earned a net $25 million. For settling with the group of producers who claimed to have helped Hill for making songs she paid $5 million as settlement fees.

Hill made $1.8 million during her work in 2007 to 2008 for which he hadn't paid any tax so she had to serve three months in prison as she accepted her charges.

Lauryn Hill was in a relationship with Rohan Marley son of late reggae legend Bob Marley for 15 years. He owns an organic coffee company named Marley Coffee and they met in 1996. That time Marley was still with his wife Geraldine Khawly and after separating from her he started living with Hill.

There are rumors that he never divorced Khawly. Marley and Hill broke up in 2009 and went their separate ways. The duo had together five children namely Zion Marley, Selah Louise Marley, Joshua Omaeu Marley John Nesta Marley and Sarah Marley She gave birth to her son Micah in 2011 but the details about his father are not known. 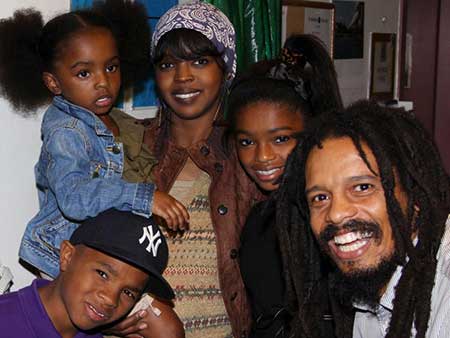 Her son Zion gave birth to his son Zephaniah Nesta which made Hill a grandmother on February 2017. Hill's daughter Selah Louise Marley is presently working in the modeling field and has worked for Kanye West in his Yeezy Season 4 show. Besides, she has modeled for Vogue and appeared in Beyonce's Latest Ivy Park Campaign and also posed for Miu Miu's new lookbook.

Her son Joshua Omaru Marley and daughter Sarah Marley has opted for a singing career. Her son Micah Hill is just a minor and is busy studying. Her youtube channel named Ms. Lauryn Hill has around 239k subscribers where she has posted all her song's music video.

Rohan Marley and Lauryn Hill gave birth to their first child Zion in 1997. Zion has five other siblings and his wife just gave birth to a child.

Rohan Marley and Lauryn Hill gave birth to their second child Selah after a year in 1998. She is into modeling and has walked for big fashion houses.

Rohan Marley and Lauryn Hill gave birth to their third child Joshua in 2002. He has done some modeling projects.

Rohan Marley and Lauryn Hill gave birth to their fourth child John in 2003. He is in his mid-teens and enjoying his teenage life.

Rohan Marley and Lauryn Hill gave birth to their fifth child Sarah in 2008. She has chosen the singing field following her mother's footsteps.

Lauryn Hill gave birth to her sixth baby boy in 2011 but the father of the baby is unknown. He just got his diploma and is focusing on his studies.