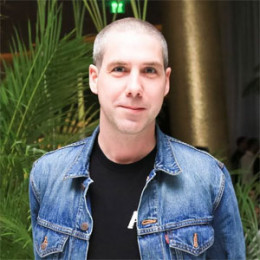 American actor, Leo Fitzpatrick is the current co-director of the Marlborough Chelsea gallery. He made his Hollywood debut from the movie, The Kids in 1995. He has also appeared in various movies and TV series including Sons of Anarchy, Broad City, The Last Castle and The Wire among others. Fitzpatrick is in a relationship with his longtime girlfriend, Chrissie Miller, they are yet to get married. The couple has a child together.

Leo Fitzpatrick was born Leonardo Aurellio Randy Fitzpatrick on 10th August 1978 in Montclair, New Jersey under the birth sign Leo. Fitzpatrick is American as per nationality and as far as his ethnicity is concerned, he is White.

Leo Fitzpatrick started his career in 1992. His life changed after being discovered by Larry Clark, a director, at Washington Square Park, New York City. He was 14-year- old at the time.

In 1995, Fitzpatrick made his Hollywood debut from the movie, Kids. He appeared alongside Chloe Sevigny, Rosario Dawson, Justin Pierce, Harold Hunter and Sarah Henderson among others.

In 2002, Fitzpatrick did his first TV series, The Wire. He worked with Dominic West, Michael K. Williams, Idris Elba, Sonja Soh, Wendell Pierce and Andre Royo in the series.

Fitzpatrick appeared in a number of series and movies in his career. His notable works include Personal Velocity, Law & Order: Criminal Intent, Carnivale, Fay Grim, The Kill Point, Sons of Anarchy, Blue Caprice and Cold Comes In the Night among others.

His recent work can be seen in 2016’s movie, The Drowning. He was cast alongside Avan Jogia, Julia Stiles, Josh Charles, Tracie Thoms and Jasper Newell in the movie.

Leo Fitzpatrick, 39, is unmarried and has no children yet. The dashing actor, however, is in a relationship with Chrissie Miller, a creative director since 2008. The couple was first spotted together in Leo’s show at Half Gallery in 2010.

The couple hasn't made any notable public presence since the 2010 event. The pair also shares a child named, Otis Miller Fitzpatrick. They welcomed their son on February 26, 2016.

Leo Fitzpatrick, 39, stands at the height of 5 feet 10 inches (1.79m). Fitzpatrick, an actor who debuted in Hollywood from the movie, The Kids has an estimated net worth of $700k as per some online sources. However, the exact amount of his net worth is not confirmed yet.

Fitzpatrick's 2001 movie, Serendipity collected $77.5 million at the box office. The movie was made with the budget of $28 million.

As per some sources, the average income of Marlborough Gallery Chelsea is $76k annually. Fitzpatrick is the co-director of the gallery, which means he makes a good chunk of money from the gallery as well.

On 26 February 2016, Leo Fitzpatrick and Chrissie Miller together welcomed their first child named, Otis Miller Fitzpatrick. The pair kept their child far from the limelight.