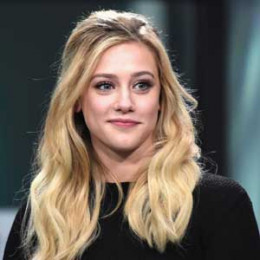 Lili Reinhart is an American actress and singer who came to limelight from the American Teen drama Riverdale where she has portrayed the character of Betty Cooper. She is also a well-trained dancer. Her performance in the short movie “The Kings of Summer” was praised by the viewers. Also, she was nominated for the New York VisionFest Awards for Breakthrough Performance category.

Born on 13th September 1996, Lili spent her childhood in the city of Cleveland, Ohio, the U.S. with her sibling sister, Tess Reinhart. From an early age, she was passionate about acting and started acting since the age of 12.

She actively participated in different acting programs during her school days. She also took part in community theater. Reinhart traveled from Cleveland to New York City along with her parents to audition.

After working in a different theater, Lili was discovered by Dara Gordon in New York City. Dara signed her in the TV show Law & Order: Special Victims Unit. The movie was based on the American police procedural, legal, crime drama which was set in the city of New York City.

Before doing the TV show she was cast in the short movie For Today, where she played the role of Rachel in 2010. After recognition from different films, she was cast in the movie The First Hope, where her performance was well appreciated and was nominated in the New York Vision Fest for the category of Breakthrough Performance Award in the year 2013.

She featured as a lead character in the TV show Riverdale in 2017. Moreover, her next most awaited movie is Galveston alongside Ben Foster and Elle Fanning which will release in 2018.

Lili is one of the beautiful actresses who maintained her affairs far from social media. Reinhart and Cole Sprouse remained very secretive about their off-screen romance for quite some time.

Both the birthday and the gift. My little muse, happy birthday my love.

Sprouse surprised his fans with his birthday post. He posted a shirtless image of Reinhart on the Instagram and captioned,

"Both the birthday and the gift. My little muse, happy birthday my love."

This actress is a good friend of Nick Robinson. Reinhart also shared the screen together in the movie The King of Summer in 2013.

Lili is one of the rising stars in the Hollywood industry. She has played over ten films and has made appearances in TV drama including Scientastic, Surviving Jack and Cocked.

Her exact net worth is not disclosed, but her lavish lifestyle is proof of her huge earning. She currently resides in the New York City. Some sources estimated that she has a net worth of about $2 million as of 2019.