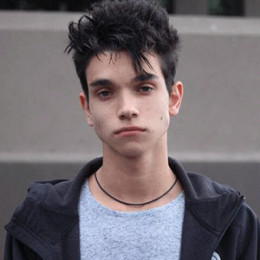 Lucas Dobre is an internet star and Vine sensation who collaborates with his twin brother Marcus on their channel Twinbotz. They are dancers as well. Their mother is a well known Romanian gymnast Aurelia Dobre and their fathers, Boz Motif is a former Iranian gymnastics national team and owner of a gym. As mentioned above he has his twin brother Marcus and two older brothers Darius and Cyrus. The brothers initially gained recognition for their Vine account with over 1.7 million followers.

Lucas Dobre was born on January 28, 1999, in Gaithersburg, Maryland to Boz Mofid and Aurelia Dobre. His father is the owner of the Fit's Fun gym and mother is world champion gymnast.

His mother moved from Romania to the United States before his birth. Lucas holds an American nationality and belongs to the white ethnicity.

He has three brothers; Cyrus Dobre, Darius Dobre, and twin brother, Marcus Dobre. Dobre along with his  Marcus run a YouTube channel Lucas and Marcus which has more than 14 million subscribers as of 2019.

Lucas is a very good dancer and his passion towards dance inspire him to open his own youtube channel. By December 2014 the channel had more than 300,000 followers.

He is one of the members of ‘Team10’ while his twin brother is the other half. Both of them have become very popular on the internet because of their highly skilled dance performances, stunts, and their versatile acts.

The first named their channel Twinbotz but later they changed into Lucas and Marcus. They have earned over 4.3 million subscribers on their youtube channel which made them one of the successful vine stars.

In 2014, Lucas and his brother created a Vine video dedicated to Lycia Faith and selfies.

The youtube sensation, Lucas Dobre is in a romantic relationship with his longtime girlfriend, Ivanita Lomeli. The duo often posted one another picture on Instagram and their cute PDA never failed to attract public attention.

As of 2019, Dobre has more than 3.3 million followers on Instagram. His YouTube channel grossed 14 million subscribers along with 1.5 billion views.

As a youtube sensation, Dobre earns a good amount of money from his career. As per some online sources, his estimated net worth is $3 million but no official confirmation has come about it.

Check out one of the popular videos of Lucas Dobre and his brother, Marcu Dobre which has more than 32m views on YouTube,