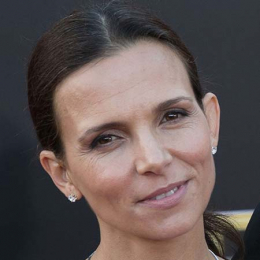 Luciana Pedraza is a famous Hollywood celebrity who came to the limelight after marrying the popular award-winning American acting and filmmaking sensation Robert Duvall. She is known for appearing in the films like Assassination Tango and Wild Horses. She is also popular for writing and directing the short documentary named The Portrait of Billy Joe.

Personal Life of Luciana Pedraza; Know about her Husband, Children

Luciana Pedraza is currently married to the famous American actor and filmmaker E. The duo shares a good bond and is together for over two decades. Moreover, they are about to share their fourteen years of a marital relationship in 2019.

The pair first met in Argentina, he once shared his meeting with his future wife saying,

Pedraza is out of any dating rumors and is also out of any media controversies. She is focused on her career and is happily living together with the love of her life. Additionally, she avoids using social media as she is a private person.

What is the Net Worth of Luciana Pedraza? Know about her Salary, Earnings

Popular Argentine actress Luciana Pedraza with her partner Robert Duvall in an event.

As for Pedraza's acting career is worked in few films like Assassination Tango in 2002 and Wild Horses in 2015. Both of the films were loved by fans which were starred by James Franco, Ruben Blades, Kathy Baker, and many more. And as for her writing and directing career, she wrote and directed the short documentary named The Portrait of Billy Joe in 2004.

In 2001, Pedraza with her husband founded The Robert Duvall Children's Fund. The organization is a non-profit organization which initially used to help impoverished children and families of Northern Argentina. But later, they started to help people around the globe by partnering with many reputable organizations. Their organization named Pro Mujer helps Latin America's poorest women through micro-credit, business training, and health care links.

The 47-year-old actress's husband is a well-known Hollywood personality who holds a net worth of $70 million. Further, he gathered that wealth with the help of his acting and film making a career. In fact, he is an award-winning actor who won Golden Globe Awards (four times), Emmy Award and a Screen Actors Guild Award(BAFTA).

Luciana Pedraza is currently married to the famous American actor and filmmaker Robert Duvall. The duo shares a good bond and is together for over two decades.