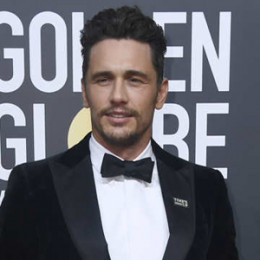 James Franco is an actor, filmmaker, and a college instructor. He debuted his acting career at the age of 21. He is one of the most promising actors of Hollywood who has appeared in numbers of hit movies and series and has received many prestigious awards. He is widely known for his portrayal of the character, Harry in the SpiderMan movies series. He earned popularity appearing in the hit movies like Pineapple Express, The Interview, and Rise of the Planet of Apes.

James Franco was born James Edward Franco on 19th April 1978 in Palo Alto, California under the birth sign Aries. Franco is American as per nationality, and as far as his ethnicity is concerned, he is of mixed ethnic background.

Franco's father is of Portuguese and Swedish ancestry whereas his mother is of Russian Jewish descent. He is the son born to Betsy Lou (a writer and occasional actress) and Doug Franco (died in 2011). His parents first met at the Stanford University. He has two younger brothers, Tom Franco and Dave Franco.

Franco was brought up by his parents in ''academic, liberal and largely secular family.'' He interned at Lockheed Martin, American global aerospace, security, and advanced technology company.

In 1996, Franco graduated from Palo Alto High School where he did several school plays. In 1998, he attended CSSSA (California State Summer School for the Arts) for his theater studies.

Franco was arrested in his high school years. He was arrested for underage drinking, graffiti, and being a part of a group that sold fragrances stolen from department stores to classmates. The arrest led him to become a ward of the state for a brief time. The judge gave him a second chance when he was facing the possibility of juvenile hall.

Franco studied English as a major subject at the University of California, Los Angeles. He dropped out after his first year to pursue his career in acting. Since he would have to wait two years to audition for their acting program, he didn't change his decision.

Franco took acting lessons with Robert Carnegie at the Playhouse West. He did a late-night job at McDonald’s to support himself, as his parents were against his acting career.

Later, he again returned to the university and earned an ungraduated degree.

While Franco was working for his Master’s degree, he attended New York University’s Tisch School of the Arts for filmmaking, took some courses at Brooklyn College and studied poetry at Warren Wilson College.

James Franco started his career in 1997. He appeared in a TV commercial for Pizza Hut that featured dancing Elvis Presley. He appeared as a guest on many television shows in his early career.

Franco was cast as the lead in NBC's TV series Freaks and Geeks in 1999. He shared the screen with Linda Cardellini, Seth Rogen, Jason Segal, Bust Philipps, and Martin Starr among others in the series. The series ran for 18 episodes and was canceled due to low viewership.

The following year, he debuted in the movie industry with Never Been Kissed. In 2002, he worked with Robert De Niro, Frances McDormand, Eliza Dushku, and Anson Mount among others in the movie, City by the Sea.

Some of James Franco's popular hit movies and TV series include:

As of 2018, Franco is working for several unreleased movies and TV series like- Kin, Pretenders, The Mad Whale, Future World, Bukowski, Zeroville, Next Gen, and The Ballad of Buster Scruggs.

Along with acting, Franco also directed, wrote and produced several movies like- The Ape, Fool’s Gold, Good Time Max, The Broken Tower, As I Lay Dying and The Long Home among others.

James Franco was nominated for various prestigious awards and won many of them. Here's a list of all his wins till date:

James Franco is unmarried to date. The Hollywood A-lister is currently in a relationship with a college student named Isabel Pakzad. He was spotted with the then 24-year-old beautiful girlfriend enjoying their lunch in Venice Beach.

Previously, Franco dated American actress, Ahna O’Reilly. The pair started dating in early 2006. They dated for five years only to break up in July 2011.

Franco was also linked to Amanda Seyfried in June 2012. She is American actress, model, and singer. The couple first met on the sets of Lovelace. They took the on-screen chemistry off-screen as per the reports by New York Daily News.

Their relationship rumors started after Franco was spotted trying to make a quiet exit from Seyfried's house. However, the relationship was not serious, as a source close to Franco told the New York Daily News.

The American actor also dated actress Marla Sokoloff. The couple began dating after they met on the sets of the movie, Whatever It Takes. While the pair was in a relationship, Franco revealed a sex tape he made as a teenager with the actress. Later, the couple separated.

In 2014, Franco received a lot of attention after he tried to date the British teenager, Lucy Clode. Clode revealed their conversation on social media where he tried to convince her for a date.

James Franco says he is both gay and straight. His affinity for gay-themed film projects has prompted widespread speculation about his sexuality for years.

Franco passed a statement on his sexuality:

‘’maybe I’m a gay. It is not who you have sex with that defines your sexuality, but instead how you act. In the twenties and thirties, they used to define homosexuality by how you acted and not by whom you slept with. Sailors would fuck guys all the time, but as long as they behaved in masculine ways, they weren't considered gay. Well, I like to think that I'm gay in my art and straight in my life.’’

He even passed a statement,

In 2017, Franco was accused of sexual misconduct by two women. Franco, after winning Golden Globe Award, was slammed by several women with an allegation of being sexually harassed by him in the past.

Sarah Tither-Kaplan, an actress, and Franco's co-star claimed that he forced her to do exploitation scene with complete nudity in some of his films. She even posted,

‘’Hey James Franco, now that you have a Golden Globe why don’t you give speaking roles that don’t require nudity in your upcoming films to the dozens of women who have done full nudity + sex scene in your indie films and art projects?’’

Another one of his alleged victims, Violet Paley, an actress, and director also released a statement saying:

‘’Cute #TIMESUP pin James Franco. Remember the time you pushed my head down into a car towards your exposed penis & that other time you told my friend to come to your hotel when she was 17? After you had already been caught doing that a different 17-year-old?''

Franco stated that all the allegations made by Paley and Tither-Kaplan on Twitter are not accurate.

Another actress, Ally Sheedy sent a series of tweets after Franco appeared in the award function,

‘’Why is a man hosting? Why is James Franco allowed in? James Franco just won. Please never ask me why I left the film/tv business.’’

However, Franco strictly denied all the allegations.

James Franco stands at the height of 5 feet 11 inches (1.8m). Franco who is the winner of many prestigious awards currently has an estimated net worth of $30 million.

Some of his hit movies that made a good collection at the box office include:

Franco owned a Spanish-style house that costs $775k, Mad Men sutome Janie Bryant worth $775k and two bunglows in LA worth $1.35 million. As of 2017. He also has bohemian duplex in LA worth $1 million.