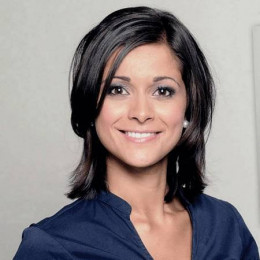 Lucy May Verasamy is an English weather forecaster, who is currently employed as a National weather forecaster at ITV weather. She studied A-Level Geography at King Edward VII School, in Norfolk and later in 2001 she graduated with a BSc degree in Geography from the Brunel University. She started her career at the Press Association’s weather center as a forecaster, writing scripts for radio and forecasts for newspapers.

Lucy Verasamy was born on King's Lynn, Norfolk, England. She is British and belongs to the White ethnicity. She attended Silfield Primary School in Wymondham. Later she joined Framlingham College Junior School in Suffolk and King Edward VII School in King's Lynn and studied A-Level Geography.

Versamu graduated from Brunel University in 2001 in BSc (Hons) degree in Geography.

Soon after her graduation, Versamy worked at the Press Association's weather as a forecaster for four years where she used to write scripts and forecasts for newspapers and radio.

out of office! see you at Windsor with team @itv tomorrow

Later, Versamy joined Sky News and she answered questions put forward by members of the public regarding climate change. She contributed to Sky News's The Weather Girls blog as well.

In 2010, Versamy joined  ITV Breakfast and runs the show, Daybreak as a weather forecaster and environment correspondent along with Kristy McCabe.

Lucy Verasamy's Net worth and Salary

She has an estimated net worth of about $1 million as of 2019. She has an annual salary of about $57,277. She makes an impressive income just like meteorologist Tomasz Schafernaker.

She is most probably single at present. Details about her personal life and boyfriend is still under the radar.