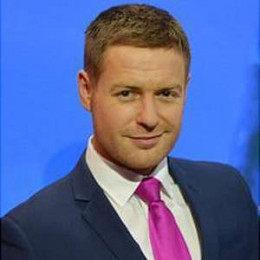 Tomasz Schafernaker is a meteorologist well known for working at BBC Weather. He studied school both in his native and in British language. Tomasz started to work for BBC Weather in 2000 as the broadcast assistant. In the same year, he became a presenter and became the youngest man to present the BBC Weather. Tomasz forecasts on the BBC News Channel, Radio 5 Live, and Radio4.

He has not revealed any information regarding his personal life and relationships.

He is not married yet and has not revealed a bit of information about his dating life.

Voila! ?#oilpainting #selfportrait #painting ...bulk of it done! In a couple of weeks I’ll add some effects and varnish it. My first oil painting! #realism #contemporaryart #contemporaryrealism

Many of you may be obvious about the fact that BBC weather presenter Schafernaker is an amazing portrait artist. His Instagram page is filled with his amazing arts.

"Started portraits a little over a year and never thought in a million years I’d be brave enough to enter anything like this."

Tomasz Schafernaker was born on 8 January 1979 in Gdansk, Poland.

He attended St. John's College, Southsea, in Portsmouth. Later he received a BSc (Hons) in Meteorology from the University of Reading.

Tomasz Schafernaker also used to give BBC regional forecasts across the UK and he was a part of BBC World presenters in the year 2003. He rejoined the BBC and became infamous for raising “the finger” from the BBC news presenter Simon McCoy. Tomasz posed for the cover of Attitude Active magazine in 2010.