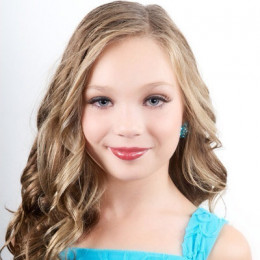 Madison Nicole Ziegler is an American child actress, model as well as a dancer. She is best known for starring in Lifetime’s Dance Moms. She has done various music videos including Elastic Heart and Chandelier. She had started dancing when she was only two years old.

Madison Nicole Ziegler was born on 30 September 2002 in Pittsburgh, Pennsylvania to the family of Kurt Ziegler and Melissa Ziegler-Gisoni. Her birth sign is Libra. She belongs to German, Polish, and Italian descent.

Her parents separated with an official divorce in 2011 and her married Greg Gisoni in 2013.

Ziegler was interested in dancing since she was just two years. She joined the Abby Lee Dance Company at 4 where she learned lyrical, ballet, tap, acro, jazz, aerial, and contemporary dance forms.

She has a younger sister named Mackenzie Ziegler who is a singer and dancer who performed in Dance Moms. She has two half-brothers Tyler Ziegler and Ryan Ziegler from her father's previous marriage and two step-siblings Michele Gisoni and Mathew Gisoni.

Previously, she studied at Sloan Elementary School. She left the school in 2013 and was homeschooled.

In 2010, Ziegler performed in Paula Abdul's reality TV show 'Live to Dance'. In 2011, she appeared on the first season of Lifetime's Dance Moms with her mother.

She continued to appear as the standout performer on six seasons of the show with her younger sister until 2016; their last season on the show.

She appeared in some music videos with Todrick Hall, Sia, and Alexx Calise. She performed at the age of 11 in the 2014 video 'Chandelier' by Sia that won the ARIA Music Award in the category of Best Video.

In 2015, she performed in 'Elastic Heart' with Shia LaBeouf. It was the same year she starred in another music video from Sia's album 1000 Forms of Fear. She appeared and danced on Sia's voice on several reality shows including Dancing with the Stars, The Ellen DeGeneres Show, Saturday Night Live, and Jimmy Kimmel Live!.

Besides dancing, she has also made quite a name in acting. She made her acting debut playing the role of Young Deb in an episode of Drop Dead Dive in 2012. In 2015, she performed the guest role on the ABC Family's Pretty Little Liars and Disney Channel's series Austin & Ally.

She has represented many brands like Capezio and Clean & Clear. She has also been featured on many magazine covers like Seventeen, Cosmopolitan, Harper's Bazaar, People, Dazed, Cosmopolitan, Teen Vogue, and Teen Vogue.

Ziegler collaborated with her sister and released a fashion line 'The Maddie & Mackenzie Collection in 2014.

She was a judge on the 2016 season of So You Think You Can Dance: The Next Generation.

She won Shorty Awards and Teen Choice Awards in 2017. Her memoir, The Maddie Diaries was a New York Times Best Seller the same year.

She was included on the list of the '30 most influential teens' for three years in series starting from 2015 by Time magazine.

Ziegler has an estimated net worth of about $5 million ar present; all from her dancing and acting career. She made about $2000 per episode from Dance Moms that totaled about $400,000 overall.

The incredibly talented dancer and her family ungraded to their new residence in their four-bedroom Pennsylvania home. They shifted in their 7000 sq.ft home after their 2500 sq.ft home was put on the market for $279,000.

They have been an item for more than a year. The couple celebrated their one year anniversary on January 2018.

i love this shoot so [email protected]

They are still going stronger with time. They share amazing posts together via social media.

Do visit Marriedwiki for more Biographies and Gossips!!!!