Home Article Newly married couple Shia LaBeouf and Mia Goth are enjoying their conjugal life to the fullest: See the journey of their relationship

Newly married couple Shia LaBeouf and Mia Goth are enjoying their conjugal life to the fullest: See the journey of their relationship 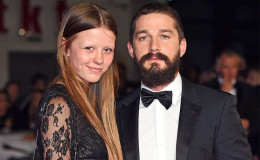 Emmy Award-winning actor 'Shia LaBeouf' is best known for his role in 'Transformers' series. He is quite popular among youngster as he began his career with Disney channel series 'Even Stevens'.

Talking about his personal life, Shia is happily married to his long-term beau 'Mia Goth' but their relationship isn't as easy as we think because they faced many ups and downs in their love life.

However, in the end, all sorted out. As we say all well if it ends well and today they referred as one of the most compatible couples of Hollywood.

Well, to find out more about your favorite couple stay with us.

Shia and Mia first encounter at the set of their controversial movie 'Nymphomaniac: Volume II' and after that meeting, they feel like they are made for one another.

On October 10, 2016, the duo converted their four-year long relationship into a blissful married life.

Their wedding ceremony was live-streamed and captured by TMZ and it was believed that their wedding costs only $700.

Shia and Mia at their wedding, Source: Daily Mail

If we looked at their wedding videos and pictures that we found them really happy and enjoying their dance moves.

Both Shia and Mia looked very simple and elegant at their commitment ceremony.

At the premiere of Man Down, Shia revealed his perspective on marriage has changed after tying the knot. He said,

"It's better on the other side, I've been lied to my whole life. You always hear these people who are all cynical, like, 'Ah, man, once you get married everything changes. But for the better though!"

"I’m incredibly proud of him, and I have great respect for him.”

Their sweet gesture towards one another surely melt our heart and it's been just five months of their marriage and more are yet to come.

Prior to their marriage, Shia and Mia captured fighting at the camera of Entertainment Tonight in Germany. This news becomes viral in a short period.

If we watched that video than we found, Shia was trying to leave for airport and Mia took his backpack in a bid to get him to stay.

He threatens her now wife 'Mia' to kill her and even he said,

After that incident couple was not seen together for two months but later they sorted out their issue and again reunite together.

Before having Mia in life, Shia was linked up with many popular actresses such as; Carey Mulligan, China Brezner, Isabel Lucas, Adrian Grenier, and Megan Fox.

Whatever may be the past he is now happy with his wife and we also hope for them to have a healthy married life.