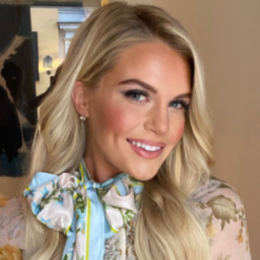 Hair designer and makeup artist, Madison LeCroy is one of the most popular hair and makeup artists in Charleston. LeCroy, however, came to the limelight after an Instagram controversy involving Alex Rodriguez.

Is Madison LeCroy Dating Anyone in 2021?

First things first, Madison LeCroy is currently in a romantic relationship with a mysterious man. The blonde beauty went Instagram official with the love of her life in June 2021. LeCroy shared a series of sweet snaps that showcased the artist cuddling her new unidentified man on a boat. 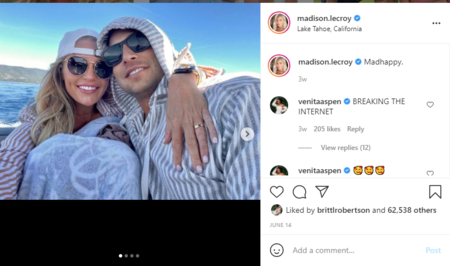 In another shot, the lovebirds flaunted similar striped coverups. In one pic, Madison and her beau showed off their toned bodies in swimsuits. Madison, further, captioned the pictures writing "Madhappy."

Apart from that, LeCroy also posted more videos from their Lake Tahoe getaway on her Instagram stories. The stylist showed one video of her man romantically helping to fix the strap on her heels.

Madison Lecroy was once married to a man named Josh Hughes. During her marriage with Hughes, they gave birth to a son named Hudson Hughes on November 4, 2012. After a few years, things did not work out as planned between the two. Madison and Josh divorced in the mid-2010s for some unknown reasons. 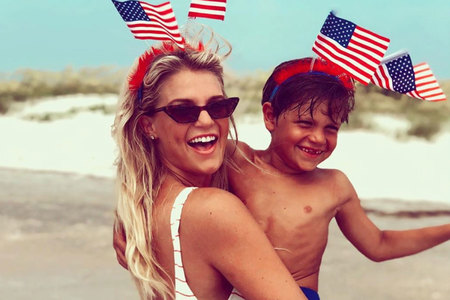 At present, LeCroy is raising her eight-year-old son as a single mother. However, sources claim Madison LeCroy and her ex-husband Josh Hughes co-parent their child together. Although he isn't tagged in any one of Hudson's photos on LeCroy's Instagram, the estranged husband and wife surely maintain a great relationship for the sake of their child.

Madison LeCroy was previously romantically linked to a guy named Austen Kroll in 2019. Sources claim they sparked romance during some legit drama in season 7 of Bravo reality series Southern Charm.

The ex-couple was in a relationship until November 2019, as Austen confirmed he and Madison were together at the time. LeCroy and Kroll indeed endured a messy breakup. But, both have moved on as Madison met Austen Kroll.

What Went Down Between Madison and Alex Rodriguez?

In an interview with Page Six, LeCroy said she never met up with the former athlete but only spoke with him on the phone. Madison resides in South Carolina, while the ex-athlete lives in Nashville, Tennessee.

Madison LeCroy bags a huge payroll from her decade-long career as a hair designer and makeup artist. At present, she possesses a net worth of no less than $1.5 million.

Speaking of her lifestyle, LeCroy owns a beautiful home in Charleston that costs over $2 million. Madison even took a house tour with Bravo TV in early 2019.

Likewise, Madison owns a thriving downtown salon and is in planning to expand the space in a way to do justice to her vision. Even though Madison cherishes her career and has celebrated much success in the beauty industry, there is more important things to her such as being a mom to her eight-year-old son Hudson.

On June 28, 2021, LeCroy took to Instagram to apologize after sending a live video by flashing her followers. Indeed, LeCroy was dragged into controversies after her sensitive body part were out all over the internet. The 30-year-old cleared it by blaming alcohol and saying she will never drink in such a way again.

Madison LeCroy was married to Josh Hughes in the 2010s. They even co-parent an eight-year-old son Hudson.

Hudson was born on November 4, 2012, in the United States. He is the only child of Madison LeCroy and Ja Cutler.