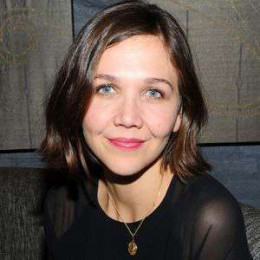 Maggie Gyllenhaal, who stunned in a Gold Sequin Jacket at the Opening Night of the 57th New York Film Festival is a renowned American actress. She made her theatrical debut in the Berkeley Repertory Theatre production of Patrick Marber's Closer. She has received Golden Globe nomination for playing a recent prison parolee in Sherrybaby.

Sherrybaby actress, Maggie Gyllenhaal shares an amazing chemistry with her longterm boyfriend turned spouse whom she met with the help of her brother, Jake Gyllenhaal. What is her relationship status.

The Deuce star, Maggie Gyllenhaal is currently married to lover Peter Sarsgaard. They were dating for three years after getting together in Jun 2002. After 3 years of engagement, they married on 2nd May 2009. The cupid's ideal wedding ceremony was held in a small chapel based in Brindisi, Italy.

The pair is blessed with two adorable children, Ramona and Gloria Ray. Their first child was born on 3rd October 2006 while the second child arrived on 19th April 2012.

As of late 2019, Maggie is living blissful life with her family so there are no signs of separation or extra marital affairs to this date.  The blue-eyed and her husband are united as a life partner for a decade now. They reside in Park Slope, Brooklyn, New York.

How Rich is Maggie Gyllenhaal?

Maggie Gyllenhaal has an estimated net worth of $15 million at present. She brings in big bucks from her career as an actress. The starlet worked in dozens of movies and TV series till today.

Maggie made her onscreen debut in Stephen's film Waterland in 1992. She portrayed sporadic roles throughout her teen years, even though she stepped away to obtain a degree in literature from University of Columbia.

Gyllenhaal and her beau decided to put their town house on the sale after living there for almost ten years. They switched there from the West Village for some personal reason.

Maggie Gyllenhaal is a living god in human. The richy rich actress doesn't just add millions of dollars to her wealth but gives some portion of her income in charities.

Maggie is a supporter of Witness, a non profit organization which works to expose human rights violations. She's co-anchored a benefit dinner with founder Peter Gabriel in November 2007.

Gyllenhaal helped  raise funds for TickleUp.Org, which helps impoverished people begin a micro-enterprise. Maggie has once helped design and oromoe a necklace which sold for US$100.

Maggie Gyllenhaal got married to Peter Sarsgaard. They were dating for three years after getting together in Jun 2002. After 3 years of engagement, they married on 2nd May 2009.

They have two children named, Ramona who was born on 3rd October 2006. She is the first child of this couple. She has one younger sister.

Glorgia Ray was born on 19th April 2012.She has one elder sister. Now she is four years old.