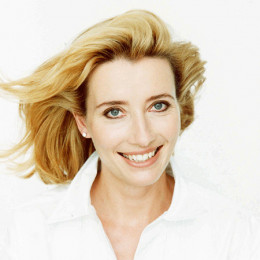 Emma Thompson is a British actress, comedian, screenwriter, and author. For her work in the British drama Howards End, she received an Academy Award and a BAFTA Award for Best Actress. In 1997, she was placed on 91st position in Empire (UK) magazine's list of "Top 100 Movie Stars of All Time". She is the daughter of Eric Thompson, an actor and Phyllida Law, an actress.

Till now Emma Thompson is married twice, at first she married an actor and director, Kenneth Branagh. They met while filming the television series Fortunes of War.

After staying 6 years together they decided to end their relation so got divorced. The couple shares no children together.

Years after the divorce, Thompson married for the second time with Greg Wise in 2013. Her spouse Greg is an English actor and producer.

The couple has two children together. Their daughter Gaia Romilly Wise was born in 1999 whereas their son Tindyebwa Agaba was adopted. Previously, she dated actor Hugh Laurie but separated soon.

Emma Thompson has the net worth of $50 million.

Emma Thompson was born on 15th April 1959 in London, United Kingdom. She is British by nationality.

He is the first husband of Thompson, whose actual name is Sir Kenneth Charles Branagh. He is an actor, director, producer and screenwriter.

Matthew Gregory Wise AKA "Greg Wise" is a British actor and producer. The couple has raised a daughter from their marriage.

She is the first child of Thompson and her husband, who was born safe and sound.

He is the adopted son of Thompson, who is said to be a Rwandan refugee. The couple is currently fighting a decision to deport him.