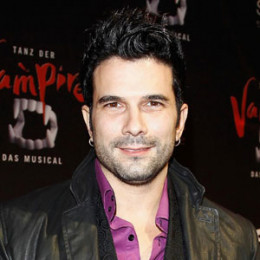 Marc Eric Terenzi, better known as Marc Terenzi, is an American pop singer. He is a former member of the boy band Natural. He then fromed a band callled Terenzi Horror Nights. He is two times Bravo Otto Gold Award for best male vocalist.

Marc was born on 27th June 1978 in Natick, Massachusetts, United State to Italian-American parents Peter and Antoinette. When he was 3, his grandmother gave him dance lessons in her studio.

Terenzi gradually developed an interest in music and started learning piano at his mother’s church. In one of the Christmas, his father gifted him a guitar. When he was 12, he began to act and host a Boston-based TV show Studio A.T.V.

Later, he moved to Florida along with his friend Damion and did various part time jobs including working as a bouncer at the House of Blues on Orlando. During the period, he befriended Ben Bledsoe and teamed up with Michael Johnson, Patrick King, and Josh Horn to form the boy band Natural.

Marc’s singing career started after forming the boy band Natural in 1999. They created a buzz in the Orlando area attracting attention from boy band mogul Lou Pearlman and signed with Transcontinental Records. They released their first single, Put Your Arms Around Me, in 2001.

The band received 2 U.S. Gold Singles charting at #3 and #8, as well as 8 Top Ten singles in Europe and Asia including a #1. Being the part of boy band Natural, they had released 2 album and 9 songs.

As per the rules of the boy band: "No facial hair, no girlfriends, and no drinks in public." But after Marc’s engagement with Sarah, Pearlman wanted to replace him in the band but the other member refused and Natural disbanded after their final tour in 2004.

Then Marc intended to form a new band, Jaded Rose but due to the other member's creative differences, he had to hold the song until 2005. Then, he participated in a one of the reality show, Sarah and Marc in Love, along with his wife Sarah. The show followed their private lives, planning their wedding and the recording of both their albums.

He released his first solo single, Heat Between the Sheets, in 2005, which reached the #40 and his follow-up single, Love to be loved by you, peaked #3 on the German charts. His solo songs received a positive response and had a huge audience which became his signature songs in 2005.

In 2006, to support the album, Awesome, he embarked on a tour. After returning back from tour, he released the song, You complete My Soul, which peaked #35 on the German chart.

In 2008, he participated in an 8 part reality show, Sarah and Marc: Crazy in Love along with his wife, Sarah. The documentary follows Sarah’s comeback in his new band, Terenzi, and worked on his new work, Terenzi Horror Nights.

Moreover, he was a contestant on the German television version of Ich bin ein Star-Holt mich hier raus! (I’m a Celebrity… Get Me Out of Here!), UK TV series and won that competition in January 2017.

Marc was married to German singer, Sarah Marianne, to whom he first met in July 2002, at the Bravo Happy holidays festival in Rust, while he was the lead singer of American boy band, Natural. After dating for a year the pair announced that the boyfriend and girlfriend were engaged in June 2003 and added that they were expecting their first child.

On 2nd February 2004, the couple becomes parents of the baby boy, Tyler Marc Terenzi. They invited their friends to celebrate the birth of their first child on 29th February 2004 and announced that they had eloped. After the birth of a baby child, the husband, and wife renewed their vows with a wedding ceremony on 18th August 2005.

­On 23rd June 2006, the couple became parents for the second time with the birth of Summer Antonia Soraya. After living together nearly for four years, the couple announced their separation in 2008 and divorced in the same year. Currently, he is single.

Marc is one of the successful American pop singers who has won 2 Bravo Otto Gold Award for best male vocalist. Though his net worth is not yet published, looking at his lavish lifestyle, he probably has a net worth not less than seven figures.

Marc Terenzi renewed his vows with Sarah Conner on 18th August 2005, in Altafulla, Tarragones, near Barcelona, Spain. The wedding was the part of the reality show Sarah and Marc in Love. Shara is a German singer, songwriter and television personality. The couple first met in 2002 during the music event in Europa-Park Rust.

Born on 23rd June 2006, Summer Antonia Soraya is the second daughter of Marc Terenzi and Sarah Connor. She was born with a heart defect, later it was corrected through surgery.