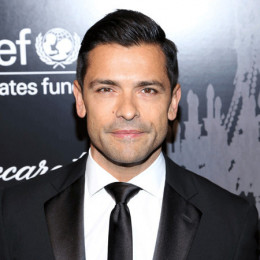 A Spanish-born American popular television and film actor who is widely known for his role as Mateo on the soap opera, All My Children.

Mark Consuelos is a happily married man to actress Kelly Ripa. Instead of having a formal wedding they eloped to Las Vegas and got married there without their parent's consent. The duo first met on the set of a movie, All My Children which was released in 1970.

There has been no report of him having an extramarital affair with anyone which suggest that he is happy with his wife and kids.

Mark Consuelos holds an estimated net worth of $8 million.

Mark Consuelos was born on March 30, 1971, in Zaragoza, Spain. He is a son to an Italian mother, Camilla, and a Mexican father, Saul Consuelos. He is the youngest among three children.

Consuelos used to watch American television while being young and learned his English watching that program. He holds a degree in marketing from the University of Florida.

Before acting career, he was a male exotic dancer at a club called "Stingers". He started his career after starring in educational serial Connect With English. He is also an ordained minister. He has his own production company alongside his wife named MiLoJo Productions.

She is also an American actor. After dating a year they got married by eloping to Las Vegas. They are parents of two son and a daughter.

He is the eldest child of the family and he is very handsome.

She is the only daughter beside two son. She weighed 8lbs 3oz when she was born.

He is the youngest son of the family. He weighed 8lbs 5oz when he was born.