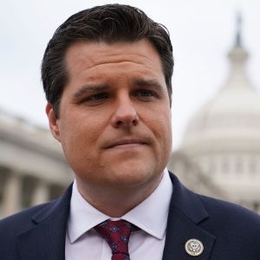 Matt Gaetz made a name for himself as one of the most prominent defenders of President Donald Trump. He is a young congressman from Florida and represents the 1st district. Before this position, he was a member of the Florida House of Representatives from the 4th district.

When you hear the term congressman in the USA, many have an image of a old, mostly white man with a lovely wife and children. However, Matt Gaetz is an exception.

Gaetz is just 37 years old and is not married yet. More to that, he is not currently in any serious romantic relationship as well. 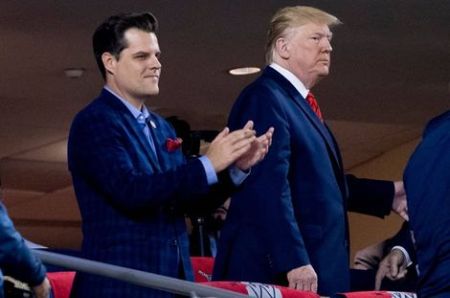 Matt Gaetz is one of the most prominent defenders of Donald Trump. SOURCE: Matt Gaetz Instagram(@repmattgaetz)

Sadly the Florida State University graduate is single, not by choice. He wants to have a partner in his life and often goes on a date, but they are mostly disturbed by his fans.

As many people are aware, the young congressman has become quite popular as Trump's protege. He is seen defending the president on every topic at every major news network. Because of this, he has become a household name and a favorite of Trump's supporters.

Matt Gaetz Dated A Much Younger Women In Past

In 2017, when Matt first came to Washington D.C. as a freshman congressman, he started an affair with a 21-year-old. He was pretty open about the relationship and often appeared on her Instagram.

As the relationship between the Florida native and that girl was blooming, his then staffer sent him a blunt text. He reminded him that his district is conservative and would not like him being with a woman who smokes weed and shares sexually explicit images.

Gaetz staffer further added that it is best for everyone to end this relationship as soon as possible and remove all the evidence of their affair from the internet. Thus, Gaetz ended the relationship and even asked his ex-girlfriend to delete photos from Instagram.

When the news of this affair became public, Gaetz urged the news outlet not to publish the name of the woman. Furthermore, he defended his action of dating someone 14 years younger than him by stating that he is a congressman, not a monk.

Matt Gaetz Comes From A Family of  Conservative  Politician

Matt Gaetz's mother is Victoria"Vickey Gaetz and Father is Don Gaetz. His household was conservative and religious. 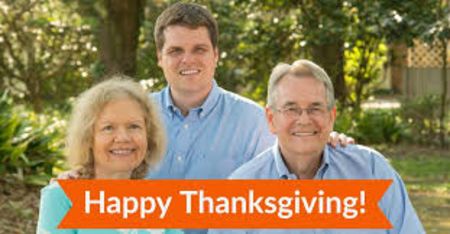 When Matt's mother became pregnant with his sister Erin Gaetz, doctors advised Mrs. Gaetz to terminate the child as that baby posed a life-threatening complication for her. But because of her beliefs, she decided against abortion and gave birth to her daughter. While doing so, she became paralyzed from the hip-down. She still is in a wheelchair.

On the other hand, Erin is living a healthy life. She is the owner of Southpaw, a digital content firm. She has worked in campaigns of her brother and politicians, such as Jeb Bush, Neal Dunn, and Daniel Webster.

Matt Gaetz is a Third-Generation Politician

Gaetz's grandfather, Jerry Gaetz, was the mayor of a small town in North Dakota and a state legislator. His father, Don Gaetz, is a well-known name in Florida politics. He was a member of the Florida State Senate from 2006 to 2016. He also served as Senate president from 2012 to 2014. 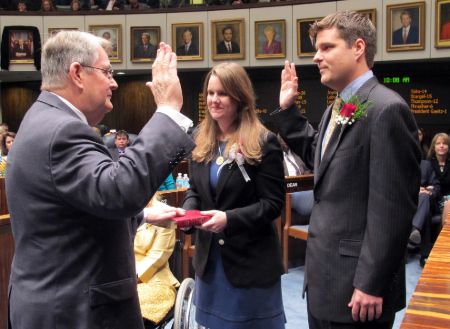 Matt Gaetz, alongside his sister and mother at his father's swearing-in ceremony. SOURCE: Mother Jones

Gaetz's father was a old-school republican and had a good reputation among both his democratic and republic colleagues. There is no doubt his father's goodwill and networking played a essential role in propelling Matt's political career.

Matt Gaetz is in Center of Many Controversies

It is pretty uncommon for the fresh young man to have such name recognition. He earned much of this popularity from creating various controversies. Some of his most ridiculous moments include inviting alt-right Holocaust denier Chuck Johnson to attend The State of the Union Address in 2018, threatening Michael Cohen with a tweet a night before his congressional hearing and organizing storming of a SCIF on Capitol Hill.

Gaetz is equally famous for creating viral moments. On December 12, during the Judiciary Committee's markup of articles of impeachment, he criticized Hunter Biden, son of former Vice President Joe Biden, for his substance abuse problem.

Soon after the representative comment, Representative Hank Johnson from Georgia reminded him of his problem with drinking and driving under the influence.

Check out the whole exchange in the video below:

The Democratic member was referencing to a incident that happened in October of 2008. The 26-year-old Gaetz was driving his dad's BMW from a nightclub to home. On the way, he was stopped by the police because of the speeding.

The officer at the duty smelled alcohol on Matt and asked him to take field sobriety and breath test. He refused, so the deputy arrested him and made him to the station and even clicked a mug shot. But later on, the charges against him were dropped, and many believe he received preferential treatment because of his father, who was a local politician. 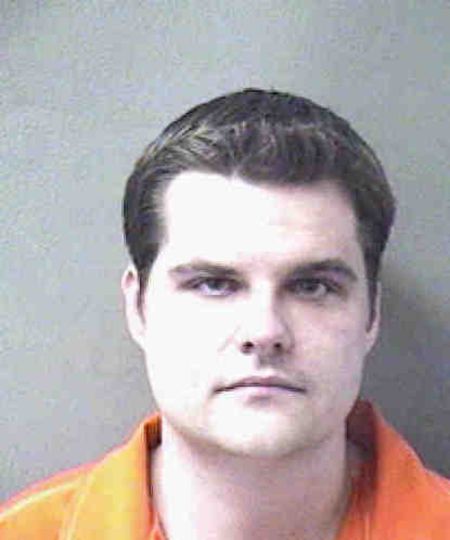 On December 17, 2019, Gaetz created headlines when he was seen arguing with a war veteran about Donald Trump. The veteran was reminding him about his oath to support and defend the constitution and voting a No for impeachment is breaking this oath. Gaetz did not agree with that sentiment.

Matt Gaetz, before entering politics, was a attorney in a private firm in Fort Walton Beach. His annual salary at the company was $29,000.

In 2010, when Gaetz first started his political journey, his financial disclosure shows a total net worth of $1 million. In 2016, his entire fortune was reduced to $388,000. 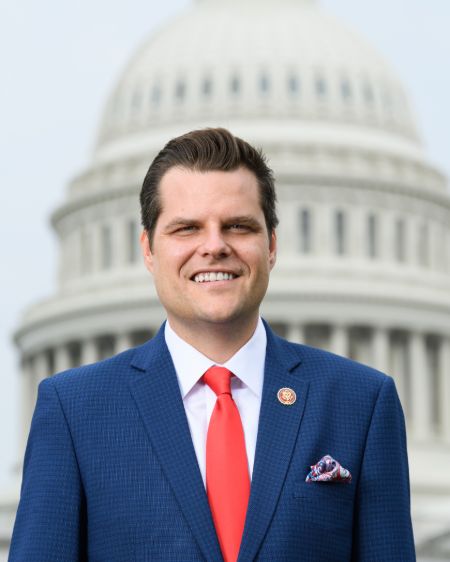 Though the politician's wealth has deduced in the past few years, he is not losing any sweat. Afterall he comes from a wealthy family. In 2006, His father, Don Gaetz, boasted a total net worth of $25 million. More to that, he owns a company called TLC Caregivers, of which Matt is also a board member.