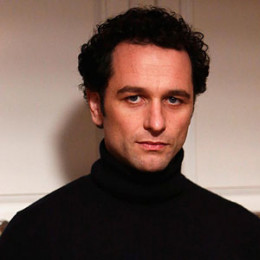 Matthew Rhys is a British actor. He is recognized for his role in the American period drama television series, The Americans. He made appearances in different movies including Deathwatch, Shooters, The Edge of Love and so on. Also, he has played various theater acts such as Look Back in Anger, King Lear, The Graduate and One More Wasted Year. Currently, his girlfriend is The Americans co-star, Keri Russell and together they have a baby boy, Sam.

Matthew was born on 8th November 1974, Cardiff, Wales, U.K. to parents Glyn, a headmaster, and Helen Evans, a teacher. He grew up along with his older sister, Rachael, who is a BBC broadcaster journalist.

In 1993, he earned the Patricia Rothermere Scholarship in RADA. There he appeared in the BBC police series Black-Up and House of America. Later, he moved back to Cardiff and started acted in a Welsh movie Bydd yn Wrol (Be Brave) for which he received Best Actor at the Bafta Cymru.

Matthew made his Hollywood debut from the American-British movie, Titus, directed by Julie Taymor in 1999. The movie is the adoption of William Shakespeare’s revenge tragedy Titus Andronicus about down fall of a Roman general. It was followed by the film, Whatever Happened to Harold Smith? of Peter Hewitt.

In 2002, he made his appearance in the British-German horror movie, Deathwatch of Michael J. Bassett which starred Jamie Bell, Laurence Fox, Kris Marshall, Andy Serkis, Hugo Speer, Hugh O'Connor. He then appeared in the British crime drama movie, Shooters, directed by Colin Teague and Glenn Durfort.

Later, he appeared opposite to Brittany Murphy in the John Maybury’s directed movie Love and Other Disasters and in Virgin Territory he was seen opposite Hayden Christensen, Tim Roth and Mischa Barton.

Besides, he has played in different theater act including Look Back in Anger, King Lear, Romeo and Juliet, Stranger House, Cardiff East and so on.

His role Philip Jennings in the period drama television series, The Americans, rose his popularity among the viewers. For his great role in the drama series, he was nominated for different awards including TCA Awards, Primetime Emmy Award, Golden Globe Award, Satellite Awards and so on.

Currently, he is working on an American television series, Girls which premiered on HBO which starred Jemima Kirke, Lena Dunham, Allison Williams, Adam Driver, Alex Karpovsky, Jake Lacy and so on. Moreover, his upcoming flick movie is The Post and Jungle Book.

Matthew is dating his girlfriend, Keri Russell, since 2013. The couple first met on the set of The Americans. The couple was also spotted on a late night date at New York’s The Public Theater.

The lovebirds are blessed with a baby boy, Sam, though the couple is yet not married.

He was honored by Aberystwyth University as a fellow on 15th July 2008. Also, he was honored at the Welsh National Eisteddfod for being accepted as a member of the druidic order of the Gorsedd of the Bards and for his contributions to the Welsh language and Wales. Moreover, he is a supporter of Plaid Cymru, a social-democratic political party in Wales.

After playing several roles in movies, TV series and theater act, Matthew has successfully collected an estimated net worth of $2 million. Along with his girlfriend, Keri, he shares the net worth of $10 million.

Born in May 2016, Sam Rhys is the one only son of Matthew Rhys and Keri Russell. Sam is a half brother of River and Willia.