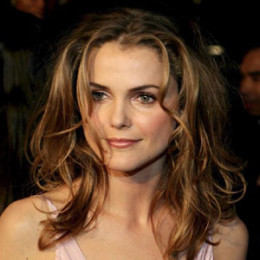 Born as Keri Lynn Russell, better known as Keri Russell, is an American actress. She came to limelight after portraying the character Felicity Porter on the American drama TV series Felicity for which she won Golden Globe Award. She has played several movies, and her popular movies include Mission: Impossible III, Waitress, August Rush, Down of the Planet of the Apes and Free Lancer. Currently, she is dating boyfriend Matthew Rhys, an actor and has a child, a boy Sam, with him. She dated Rhys after divorce with her previous husband, Shane Deary.

Russell was born on 23rd March 1976, Fountain Valley California, to parents Stephanie and David Russell. Her father is a Nissan Motors executive where as her mother is a homemaker. She grew up along with older brother, Todd and a younger sister, Julie.

The family frequently moved to different places like Coppel, Texas; Mesa, Arizona: and Highlands Ranch, Colorado due to her father’s work. She had interest in dancing and acting from her childhood.

Keri began her career at the very early age of 15 and made her acting debut from All-New Mickey Mouse Club, Disney Channel series in 1991 and appeared till 1993. She shared the screen along with Ryan Gosling, Christina Aguilera, Britney Spears, JC Chasez, Tony Lucca, and Justin Timberlake. She won a nomination for Young Artist Awards for her role in the series.

She then was cast in the American comedy science fiction movie, Honey, I Blew Up the Kid, directed by Randal Kleiser, in 1992. She played alongside Rick Moranis and was nominated for Young Artist Awards for Best Young Actress Co-starring in a Motion Picture.

Later, she made her appearance in the movies like Eight Days a Week, The Curve, Mad About Mambo, We Were Soldiers and so on. Her role Felicity Porter in the American drama television series, Felicity won her a Golden Globes Award and Teen Choice Awards.

She returned to TV with American period drama TV series, The Americans, of Joe Weisberg in 2013. She portrayed the character Elizabeth Jennings and was praised for her role by the viewers. She received Satellite Awards and won nominations for different awards including Women’s Image Network Awards, Critics’ Choice Television Awards, Primetime Awards and so on.

Her next successful hit movie was Dawn of the Planet of the Apes directed by Matt Reeves in 2014. She shared the screen along with Andy Serkis, Jason Clarke, Gray Oldman, Toby Kebbell, Kodi Smith-McPhee.

Moreover, she last appeared in the Gary Ross’s directed historical period war movie, Free States of Jones which starred Matthew McConaughey, Gugu Mbatha-Raw, Mahershala Ali. Apart from acting, she has given her voice in an animated superhero movie, Wonder Woman.

Keri Russell is one of the successful actresses of Hollywood industry who has earned not only popularity but also a huge net worth. Her current estimated net worth is $8 million. She lives in a lavish bungalow, valued around $1 million.

Keri was previously married to long-time boyfriend, Shane Deary in Valentine’s Day Ceremony in 2007. The couple first met through their mutual friends, and after dating for several years, they engaged in 2006. The wedding ceremony was a private one which included only the family members and close friends.

As husband and wife, they welcomed two children: a son River and daughter Willia. But unfortunately, the married couple separated in 2013 and started living separately. Their divorce was kept hidden from the media, but later on, Keri herself confirmed the news in an interview.

Soon after she divorced Shane, Keri started dating Matthew Rhys, a Welsh actor. The couple was spotted on a late night date in New York’s The Public Theater.

In May 2016, the boyfriend-girlfriend welcomed their first baby boy, Sam. The pair has even shared different pictures on their social media including Instagram.

Shane Deary, a carpenter is the first husband of Keri Russell to whom she married in 2007 in New York. Their marital relationship lasted till 2013.

Born in 2007, Riber Deary is the elder son of Shane Deary and Keri Russell.

Born in 2011, Willa Deary is the younger daughter of Shane Deary and Keri Russell.

Born in May 2016, Sam Rhys is the first child of Keri Russell and Matthew Rhys.