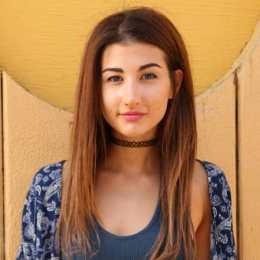 Meg DeAngelis is a popular actress and social media celebrity. She got recognition from her YouTube channel "MayBaby" where she provided gymnastics and cheerleading tricks and tips. She later acted in TV series and movies including superhit movie "Trolls".

Is Meg DeAngelis in a Relationship? Know More About Her Personal Life and Boyfriend

Meg DeAngelis is currently single and is focusing on her career. However, she was in a relationship with singer and YouTuber Alex Aiono in 2014-15. 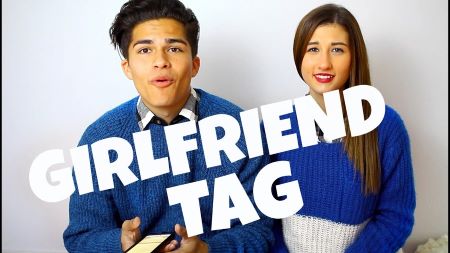 She said in a YouTube video that she's people always ask her about her boyfriend. She confessed in the video below about has one back in 2014!

The relationship lasted only a few months but when they were together, they made their relationship public and appeared in one another's YouTube channels.

The break up was amicable as the couple was seen together multiple times after the split and also starred together in series Royal Crush. Alex stated in an interview,

"Meg was the coolest person I met, I feel blessed to have a friend like Meg."

DeAngelis relationship with Alex may be complicated but her love for Harry Potter Books is not as she tattooed  “mischief managed”, a reference to books, in her left feet. She also tattooed the coordinates 43°52’30” N 79°44’8” W on her left ribs from the time she, her sister and her best friends met in Germany.

What is Meg DeAngelis Net-Worth?

Meg DeAngelis overall net-worth is around $750,000-1 million. She amassed her fortune through her work on YouTube, movies, and television appearances.

Where is one place in the world you've always wanted to visit?! Here's a pic from a scene in #RoyalCrush of Desi and Sebastian exploring a market in the Caribbean! I have so many cool photos from the shoot....i wish I was as cool as my character and would casually explore foreign places in cute outfits

DeAngelis started her career with her YouTube channel MayBaby in 2008 and garnered over 5 million subscribers and became one of the big names on YouTube.

DeAngelis worked with brands such as Seventeen, HP, Target, Intel, Hollister, and CoverGirl and launched her PBteen home-decor collection. She took a break from YouTube in middle but she is back now and earns $3thousand- $47.8 thousand per year.

In the meantime, she worked on various TV series including Royal Crush, Lost Generation, Guidance. On average, the TV actress earns $50,305 yearly thus she earned substantially from these shows.

DeAngelis also was part of superhit movie Trolls as Moxie Dewdrop alongside stars Anna Kendrick, Justin Timberlake, Zooey Deschanel which earned $346.8 million at the box office against the budget of $125 million.

Meg DeAngelis was born on 15 May 1995 as Megan Nicole DeAngelis in Toronto, Canada to Mario DeAngelis and Elspeth DeAngelis. She has a twin sister Ashley DeAngelis.The family moved to Germany when she was young. 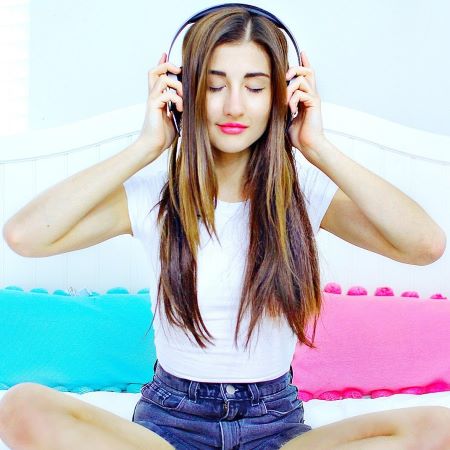 DeAngelis attended Frankfurt International School while in Germany and after completing High School she moved to the USA and joined the University Of Florida.