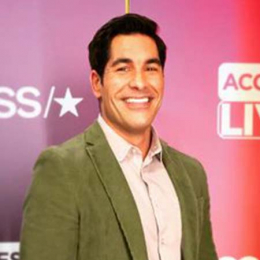 The multitalented personality, Micheal Catherwood is popular among audiences by his stage name Moniker, Psycho Mike. He is a well-known actor who also enrolled in hosting and podcasting. The 40-year-old radio personality is popular for his work on KROQ radio show Kevin and Bean and also as co-host of syndicated radio show Loveline.

Is Michael Catherwood Married? Who is his Wife? Know More about his Personal Life;

Michael Catherwood is happily married to Rules of Engagement actress Bianca Kajilich since December 16, 2012, in an intimate beach wedding. The groom opted for a traditional Black tuxedo and bride went for modern style with white jacket dress with no veil. The bride completed her beautiful beach wedding look with a low bun and flower pinned at the side. 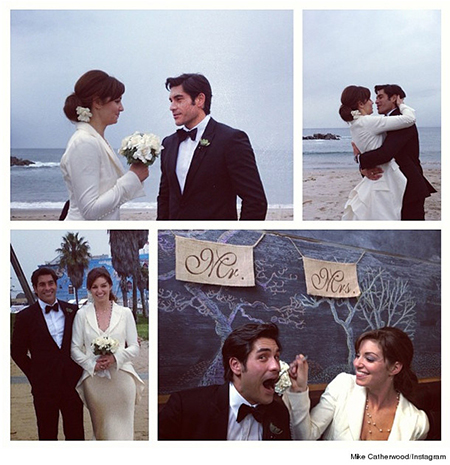 Michael Catherwood and Bianca Kajlich at their wedding.
SOURCE: toofab.com

The couple first met in September 2010 when Bianca came as the guest in Micheal show Loveline. The sparks immediately went up between them and they started dating soon after. Besides, the couple officially announced their relationship on June 19, 2012, after sharing their personal life in the "Life and Style Magazine". What's more, the pair is currently celebrating their six years of the marital relationship.

The couple added a new member to their family, a daughter Magnolia Moon Catherwood who was born on April 10, 2014. Catherwood is a doting father and left his job at Lifeline in 2016 to spend more time with his daughter.

Micheal is open about his past drug abuse problem including the use of cocaine, LSD, ecstasy, meth, and alcohol. He tried rehabilitation at a different point in his life but was not successful until he got treatment from Las Encinas Hospital in Pasadena. He is sober since 2002 and has since focused more on nutrition and fitness.

Thursday radio with the best of the best. @thejasonellisshow Sirius XM 103

As of 2019, Micheal is also an amateur bodybuilder and certified personal trainer. He enjoys writing and playing music, surfing, lifting weights and yoga. His favorite bands are Black Flag and Faith No More.

What is the Net Worth of  Micheal Catherwood? Know about his Salary, Earnings

Back at @accessonline and it feels good. Tune into watch on @nbc

Micheal currently hosts several podcasts including “Swole Patrol” with Dr. Drew. The podcast is in sponsorship partnership with various brands which are worth hundreds or thousands of dollars. Besides, He started his career as a producer with the show Kevin and Bean and later co-hosted Loveline from 2010-2016. Further, he currently hosts several Podcast including Swole patrol and Neon Black.

Catherwood is a car lover and owns many expensive and luxurious cars. In fact, he owns a black Cadillac CTS which on average costs $46,995. What's More, Catherwood’s spouse Bianca used to own a 1940s cottage situated on the border between the Marina del Rey and Venice, California. The house was a 2,000 square-foot home with four bedrooms and three bathrooms. further, the actress sold the house at a price of $2.9 million in 2017.

Micheal Catherwood was born as Michael Dwight Catherwood on March 15, 1979, in California to mother Rachel Catherwood and father Dwight W. Catherwood. He has only one sibling, a sister named Tracy Catherwood. In addition, he holds American nationality.

He grew up in San Marino, California where he attended San Marino High School. He joined Rutgers University but did not complete even his first year due to the substance abuse problem. He wanted to become Rockstar initially but started broadcasting to support himself.

Michael Catherwood is happily married to Rules of Engagement actress Bianca Kajilich since December 16, 2012, in an intimate beach wedding.

Micheal and Bianca are proud parents of their only child who is a daughter named Magnolia Moon Catherwood who was born on April 10, 2014.