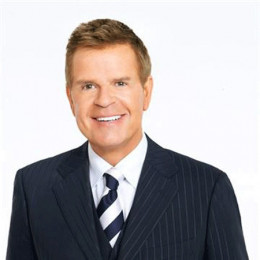 Michael Eugene Joseph Jerrick commonly known as "Mike Jerrick" is a News reporter and anchor, who has been the co-host and current fill-in host on Fox & Friends on the Fox News Channel. Jerrick now co-hosts Good Day Philadelphia on WTXF. He began his career at Topeka's WIBW-TV in Kansas. He studied at Chaplain Kapaun Memorial High School, now changed to Kapaun Mount Carmel Catholic High School and is a graduate of the University of Kansas.

Talking about his personal life, till now he has been married only once and with his wife Joy, he has raised two pretty daughters Jessica and Jill Jerrick. Detailed information about his wife has not been mentioned to any of the sources yet.

It is confirmed that he no longer is in a marital relation, as he has divorced his wife. Recently he got engaged to his girlfriend Shelda whom he proposed romantically in Grand Central Station in December 2014.

Since the engagement, the couple is enjoying every phase of their relationship.

Jerrick possesses a net worth of about $2 million as of 2019.

He studied at Chaplain Kapaun Memorial High School. Formerly, he worked as a co-host with Juliet Huddy in the morning program The Morning Show with Mike and Juliet.

She is the first wife of Mike whose personal details has not been disclosed to the media yet.

She is the first child of Mike, who was born safe and sound.

She is the second child of Mike. Her date of birth is unknown.