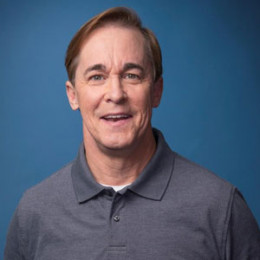 Mike Seidel is a very talented and passionate American meteorologist who has been working at The Weather Channel since March 1992. He is noted for his outstanding field reports and news covers on the happening and breaking weather reports. His interest in weather had started since his young age. He was 6, when he began measuring the snowfall in his hometown and while in 8th grade, he had installed a weather station on the roof of his house. He has worked in several of the radios before debuting in television journalism.

He is a married man. He is married to his longtime girlfriend Christine Schroder since 1994. He has two children from his wife. He has been loyal to his wife. He loves to spend his time with his wife and children.

11.4" of snow followed by temps warming to 34 yielded the perfect opportunity to roll a #snow bale tonight in St. Louis. This one weighed in at >50 lbs. Photo by @trishrags

He has not been pulled in any women related rumors or scandals. He has been living a happy and peaceful life. He loves his privacy and keeps his personal life out of professional.

Michael Phillip Seidel was born on 18 January 1956 in Salisbury, Maryland.

He started working at The Weather Channel since 1992. He was criticized on social media for his coverage of Hurricane Florence in September 2018.

So dramatic! Dude from the weather channel bracing for his life, as 2 dudes just stroll past. #HurricaneFlorence pic.twitter.com/8FRyM4NLbL

In above Twitter, Siedel swaying back and forth while reporting Hurricane Florence while the other two people walking behind him seemed unaffected.

The Weather Channel defender the reporter and released a statement to the Washington Post:

"It’s important to note that the two individuals in the background are walking on concrete, and Mike Seidel is trying to maintain his footing on wet grass, after reporting on-air until 1:00 a.m. ET this morning and is undoubtedly exhausted."

She is long time girlfriend who is from his home town. They love each other very much and are living happily together since more than two decade. They have two children together.

He is grown up now and is busy in his studies. He is grown to be a handsome and good looking one. His parents love him very much.

She is now grown up to be a beautiful girl. She attends high school and is very cheerful. She loves her parents very much.