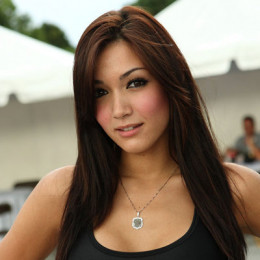 Misa Campo is the hottest and very beautiful model and an actress. She has appeared in an Indonesian movie called Pacar Hantu Perawan. She was born to Filipino father and a Dutch mother. Thus, she has mixed ethnicity giving her a perfectly stunning blend looks. She has posed for several of the magazines. She is a regular face on auto shows and Hot Import Night events. Her pictures are viral on the internet. Her real name is Michika Devieux.

Misa Campo was born as Michika Devieux on January 28, 1988, in Montréal, Quebec, Canada. She has two siblings; Jen and Marie. Her zodiac sign is Aquarius. She holds both Canadian and American nationality and belongs to the mixed ethnicity of Filipino and Canadian.

Misa began her career as a bartender and during that time she was spotted by her boss and suggest her to pursue her career in modeling line. Initially, she was offered with Montreal’s annual racing car show Sports Compact Performance. In 2006, she became the Miss Rocawear Canada.

Later, she moved to Los Angeles to further push up her career. She has appeared in popular magazines like; Maxim and DragSport. In 2011, she voted as one of the FHM 100 Sexiest Women and was the cover girl for FMH magazine.

She is best known for her role in the Indonesian horror movie Pacar Hantu Perawan.

Misa Campo, 31, is possibly single at the moment but previously she was linked up with Max Linder in 2012. Despite that, she hasn't linked up with any guy nor her dating rumors were aired. She prefers to maintain her relationship with her career rather than any romantic relationship.

Misa is quite fond of dogs as she has a dog name Dani whose pictures she often posted on her Instagram. She has thousands of followers on her social sites who admire her work.

She was rumored to be pregnant but is completely airy and also to be in competition with Sara Jean Underwood.

Misa has earned huge success in her short span of a career. Considering her amazing career, it might be sure she has earned a decent amount of net worth. However, due to her secretive nature, she hasn't revealed the exact figure of her net worth.