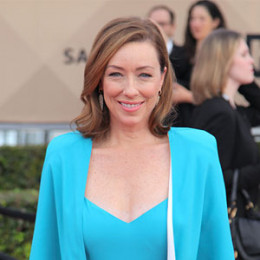 Canadian actress, Molly Parker is known for her outstanding performances in several independent movies including the most prominent one in the Netflix series, House of Cards as Whip Jacqueline Sharp and on HBO series Deadwood as Alma Garret. She won two Genie Awards under the Best Performance by an Actress in a Leading Role and in a Supporting Role, along with an Emmy nomination. Parker married director, writer, and producer "Matthew Bissonnette" but later divorced.

Molly Parker was born on 30th June 1972 in Maple Ridge, British Columbia, Canada. She belongs to Caucasian ethnicity and holds a Canadian nationality. Parker was raised on a farm in picturesque Pitt Meadows, B.C., where her parents owned a retail seafood store. She grew up there along with her brother, Henry Parker.

Parker had a keen interest in stage performance and acting from her childhood. She began learning ballet at Royal Winnipeg Ballet for three years. She eventually gave up ballet in her late teens in order to pursue acting.

Soon after her high school, Parker got enrolled in a three-year course at the Gastown Actors' Studio in Vancouver and got professionally trained.

Molly Parker made her acting debut in 1991 with TV series, My Son Johnny. Then she appeared in numbers of films and TV series but her appearances went uncredited. Her career took a major turning point when she landed up a role in 1995 TV movie, Serving in Silence where she portrayed the role of the daughter of a lesbian military officer.

Parker earned Gemini Award nomination for her amazing performance in the 1995 Lifetime TV movie, Ebbie. After a year she won the Gemini Award for Lynne Stopkewich's film Kissed in the category of best actress.

She is best known for portraying the controversial roles on screens. Her critically acclaimed film is The Center of the World and her performance as a rabbi in hit American drama series Six Feet Under was also highly appreciated. She also starred in HBO series, Deadwood from 2004 to 2006 but she rose to prominence after starring as a Congresswoman, Jacqueline Sharp in hit Netflix series, House of Cards along with A-list actors, Kevin Spacey, Robin Wright, Kate Mara and so on.

Some of her recent screen credit includes The 9th Life of Louis Drax, along with Aaron Paul, Jamie Dornan, and Sarah Gadon. Aside from movies, she is also busy with her new venture, Lost in Space which was Netflix remake of 1965 TV series. The show will hit the TV screen on April 13, 2018.

Molly Parker has an estimated net worth of $2 million. She earned nearly $500,000 per movie or TV series. She has worked on many box office hit movies, in 2009 she was part of a post-apocalyptic drama film, The Road which earned $27.6 million at the box office. Similarly, IMDb rated the movie with 7.3 stars out of the 10.

Molly Parker is possibly single at the moment but previously, she was married to the director, writer, and producer Matt Bissonnette. The duo exchanged the vows in an intimate ceremony in the presence of their closed ones and family members in 2002.

The couple shares a son, William Strummer Bissonette who was born on October 13, 2006, in Los Angeles. However, the pair failed to sustain their marriage and eventually divorced in 2012.

Parker is quite discreet about her personal life which might be the reason she never talked about her relationship publicly. She prefers to keep her private life far away from the limelight.

Check out the video below of the interview of Molly Parker on CBC chat show, George Tonight,

William Strummer Bissonette is the only child of Molly Parker. He lived with his mother after his parents divorced.