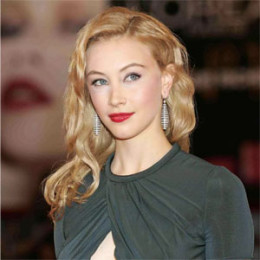 Canadian Screen Award-winning actress, Sarah Gadon is best known for her roles in the movies and series like A Dangerous Method, Cosmopolis, The Other Me, Flashpoint and many others. She made acting debut from the series, La Femme Nikita at the very early age of 10.

Sarah Gadon was born on 4th April 1987 in Toronto, Ontario to a teacher mother and a psychologist father. She is Canadian and belongs to mixed ethnicity(English and Italian).

Gadon was raised along with her older brother, James. She studied at the Vaughan Road Academy as an Ontario Scholar. She then attended the University of Toronto’s Cinema Studies Institute at Innis College, taking up Cinema. Apart from this, she is fond of dancing so spent her teenage learning dance and acting from The National Ballet School of Canada and the Claude Watson School of the Performing Arts.

Godan then, appeared in numbers of series including Twice in a Lifetime, Are You Afraid of the Dark?, Flashpoint, and The Other Me. For the latter, he won a nomination for the Young Artist Award.

Among all her works, she is better known for the series, Flashpoint and Ruby Gloom. For her performance in both the series, she was nominated for Gemini Award and ACTRA Award.

Some of her movie credit includes  Cosmopolis, Enemy and A Dangerous Method. Apart from acting, she made her directional debut from the documentary series, Reelside.

Sarah Gadon is in a committed relationship with her longtime boyfriend, Matt Hannam who is a multiple time award-winning film editor for various TV series and movies. The couple started to date after meeting for the first time on the set of Antiviral.

Today it’s been more than 3 years and seems they are in no hurry to get married. However, Gadon once talked about being a mother. She said,

‘’ As women, it is something we all have to think about – when are you going to be able to do that and how are you going to fit that around your career? And I look at these amazing icons like Cate Blanchett and Meryl Streep and think it must be possible.’’

Maybe soon the pair will start a family.

Apart from acting, she also makes much from photo shoots on various magazines and events. She is living a lavish lifestyle and often travels to many beautiful places. She shares the pictures of her visiting places with her fans on her Instagram account.