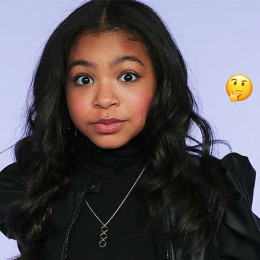 Catching the limelight at an early age is not a piece of cake. The youngster we are talking about is none other than the famous Disney actress Navia Robinson.

Robinson's been acting for almost a decade as she stepped in the business at 4 years of age. The actress is famous for her works in many television programmes including free Rein- Netflix series.

Navia Robinson is a famous child actor. She is currently living with her family and she is the proud student of Johnson Ferry Christian Academy. The Disney acting star has garnered so much love and support from her fans in Hollywood.

The 4-feet-9-inch actress loves to travel and spend time with her family. In her Instagram account, she posts a lot of pictures of her family members on many occasions.

Apart from Robinson's acting career, she likes to spend her free time singing. She also loves to go on charities and support for the gender equality campaigns. Here is the picture of her holding a banner to support feminism along with her friend.

Navia Robinson is estimated to hold a net worth of $300,000 all thanks to her acting career and family. The 13-year-old-actress is engaged in various acting commercials and projects as of now. She is believed to have a salary of $50,000 annually throughout her TV acting life.

Netflix and Disney child actress Navia Robertson at the 2018 Christmas.

Like Robinson, Noah Schnapp is also an active Hollywood child actor who famous for his roll in Netflix series horror film Stranger Things. He is estimated to hold the net worth of $3 million from his acting career.

The Netflix series actress is a lively Instagram user. Moreover, she owns an impressive fan following as a kid with over 715k followers. Likewise, she also uploads her own personal life and professional life videos on her youtube channel.

Navia loves animals and cares about little things about them. She owns a pet dog named Shade which is a Husky. The dog is originated from Russia and the average price of the dog is $600-$1,300.

The Raven's Home actress has worked in the various productions of many national commercials like Moe's Southwest Grill, Dr. Charles Stanley's In Touch Ministries and many more. After which, she performed in the web campaign for the Boosterthoon Fun Run Organization.

Moreover, in 2011 Navia participated in her first national talent competition at the Actors, Models, and Talent for Christ 'Shine' event where she ended up being on the top-ten finalist.

Robinson was picked by Nicki Minaj on the early year of 2016 for her new album about growing up in Queens, titled as "Nicki". After that, she was invited to work in the Disney Channel with Raven Symone in family show 'Raven's Home'. She was also featured in the Netflix series titled 'Free Rein' in 2018.

Navia Robinson was born on 4 May 2005 in Marietta, Georgia with Taurus birth sign. She was raised along with her two elder brothers. Her mother's name is Lisa Butler Robinson.

Famous Disney actress Navia Robinson at a competition at the early age of 8.

The actress showed a keen interest in acting and modeling since her childhood. She trained at various acting schools and workshops in Atlanta, Georgia and Los Angeles, California to sharpen her acting skills. Besides, acting and modeling she also loves to sing in free time.