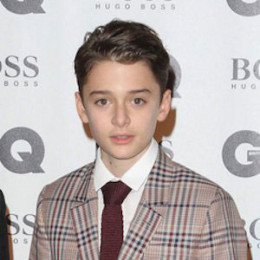 Screen Actors Guild Awards winning child actor, Noah Schnapp is popularly known for his role in the Netflix TV series, Stranger Things, through which he rose to stardom. Schnapp made his big screen debut in 2015 from the historical drama legal thriller movie, Bridge of Spies. Some of his other movies include The Peanuts Movie, The Angry Birds Movie, and The Circle among others.

Noah Schnapp was born Noah Cameron Schnapp on 3rd October 2004 in New York City, New York. His star sign is Libra. He holds dual nationality, American-Canadian, and belongs to Mixed ethnicity (Ashkenazi Jewish and Sephardi Jewish). His Canadian-American parents, Mitchell Schnapp and Karine Schnapp raised him with his fraternal twin, Chloe Schnapp. He is four minutes older than his sister. His family was from Montreal.

From the very early age, Schnapp loved to entertain people. From the age of six, he started acting in school and community theater plays.

Some of his other movies include  The Circle, We Only Know So Much, Intensive Care, and Abe. Since 2016, Schnapp worked in Netflix’s TV series, Stranger Things sharing the screen with Millie Bobby Brown, Gaten Matarazzo, Finn Wolfhard, Caleb McLaughlin and Winona Ryder among others. His fans and critics appreciated his acting. The creators also praised his acting saying,

‘’When we hired him we knew that he was incredible and we knew we were going to underutilize him in season one and we just said to him trust us your time is coming well seasons who got here and his time came and he rushes. He completely utterly crushes.''

In 2015, Schnapp gave his voice for the video games, The Peanuts Movie: Snoopy’s Grand Adventure. A year later, he appeared in a music video, LA Devotee by Panic! At the Disco, American rock band.

Noah Schnapp has an estimated net worth of $1 million. Some of his movies that made a good collection at the box office include:

Schnapp earns much from the TV series, Stranger Things:

Noah Schnapp is a young actor and is yet to involve in any kind of romantic relationships. As of now, he is single and focused on his acting.

Schnapp is close to Millie Bobby Brown and other co-stars from Stranger Things.

Some of his hobbies are skiing, hanging out with friends and playing video games. He is also active on Instagram and has around 6.8 million followers as of 2018.

Schnapp has a pet dog named Spaghetti(The King Charles breed), who also has its own Instagram account named itsyourdogspaghetti.

Below, the video is about Noah Schnapp's facts: