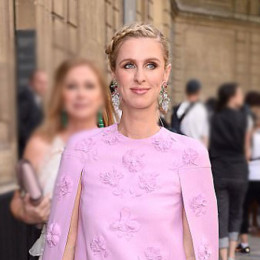 Nicky Hilton Rothschild is a 34 years old American fashion designer, socialite, and model. She launched her own clothing line in 2004 and designed many handbags in collaboration with Japanese company Samantha Thavasa. She is actively involved in social works too. Nicky is married to James Rothschild since 2015.

Born on October 5, 1983, Nicky Hilton Rothschild is the daughter of  Richard Hilton, a hotel heir of the Hilton family and real estate businessman and Kathy Hilton, a former actress. She grew up in New York City.

Hilton grew up in a Roman Catholic family. She is an American by nationality and belongs to Mixed ethnicity.

Rothschild graduated from Convent of the Sacred Heart in 2001. She was interested in fashion designing since her early days and to pursue her hobbies in the profession, she joined the  Fashion Institute of Technology and Parsons The New School for Design but didn't complete her course.

Nicky Hilton Rothschild started her professional career as a fashion designer. In 2004, she opened her own clothing line, and after three years in 2007, she launched her second line, Nicholai. Her both clothing line was a huge success. In 2014, she launched a 10-piece collection with eLuxe, and each one of them was the reflection of her own personal styles.

She just not limited her designs in clothes but also expanded her field in handbags, jewelry and cosmetics brands. In August 2017, she announced her Mommy and Me capsule collection along with Tolani which will be in stores in 2018, spring.

Rothschild is also made her modeling debut in 2005 with Australian underwear line Antz Pantz. She also featured on the cover page of Lucire for its New Zealand and Romanian editions.

In 2006, she opened two Nicky O Hotels in partnership, but the business dissolved after conflicts with her partners. She launched her first book, 365 Style in 2014.

She is actively involved in social works too; she supported social causes such as; Starlight Children's Foundation, Make-a-wish Foundation, Race to Erase MS and Union Rescue Mission.

Hilton is happily married to James Rothschild since July 10, 2015. The duo exchanged vows in a lavish ceremony at The Orangery in Kensington Palace Gardens in London, England.

Many known celebrities were present at their nuptials including; Chelsea Clinton, Kate Beckinsale, Stephen A. Schwarzman, Anne Hearst and much more. The duo chose  Botswana for their honeymoon destination.

The husband-wife is proud parents of a daughter, Lily Grace Victoria Rothschild, born on July 8, 2016. In August 2017 she announced her pregnancy for the second time.

Previously she was married to her best friend and businessman, Todd Meister. They tied the knot on August 15, 2004, at the Vegas Wedding Chapel in Las Vegas, Nevada in a private ceremony. Their marriage lasted for only nine months, divorced on 2005.

Nicky Hilton is one of the wealthiest fashion designers as she is involved in different fields of fashion from clothes to cosmetics. She hasn't disclosed the exact figure of her net worth, but it is assumed to be in millions of dollars.

Her wedding registry with James cost around $28,000, and she wore a Valentino Haute Couture gown costing $77,000. She shares her husband's fortune of over $400 billion as well.

Todd Meister is an American businessman and childhood best friend of Nicky Hilton Rothschild. The duo's marriage lasted for only nine months because often they both had to travel a lot and didn't get enough time for one another.

James Rothschild belongs to the Rothschild dynasty. He started his career as a financier in the N.M. Rothschild & Sons Limited. L.

Lily Grace Victoria Rothschild is the first child of Nicky and James. She is believed to be as beautiful as her mother.