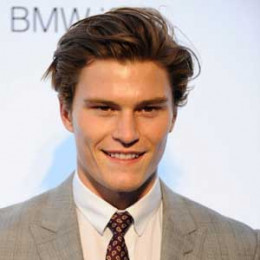 Oliver Cheshire started modeling from his early age. He has done modeling for many famous brands like Missoni, Hollister, Spencer and so on.He was a lead model of Marks and Spencer campaign. He also writes a fashion blog in wearthetrousers.blogspot.co.uk.

Oliver Cheshire is an English male fashion model, born on 3 June 1988 in London.

Cheshire began his modeling career at an early age of 15 from Select Model Management when he was studying drama. He soon achieved success as the new face of the Calvin Klein. Oliver left theater studies for his modeling career. In 2008, he appeared for Jack Wills's advertising campaign in Rajasthan, India. He has also modeled for Dolce $ Gabbana, Missoni, Abercrombie & Fitch, Hollister, Vivienne Westwood, Gap and Marks and Spencer.

While working as the lead model for the Marks and Spencer males swimwear campaign, he accompanied the fashion brand to gain 50% boost in sales. He reported on Men's Fashion Week for GQ magazine. He also writes for his fashion blog wearthetrousers.blogspot.co.uk, where he shares style advice and trend predictions, in his extra times. He was titled as one of GQ's best-dressed British Men in 2015.

Oliver Cheshire si not married yet but engaged with Pixie Lott, who is an English Singer. The lovebirds dated for over four years, and eventually, Oliver proposed with a diamond ring.

They haven't revealed any plans for their marriage. The couple is living a happy life.

As of 2017, Oliver Cheshire, net worth is under review. Being a famous fashion model, who has modeled for many reputed brands, and also writes his own blog, it can be assumed that he must be earning a decent amount of salary.