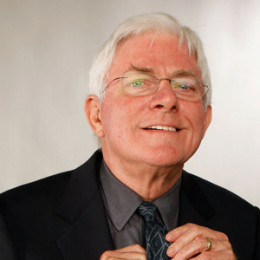 Emmy Award-winner Phil Donahue is a pioneering television talk-show host. His father, Phillip Donahue, was a furniture sales clerk and his mother, Catherine McClory, a department store shoe clerk. He graduated from the University of Notre Dame, which is also run by the Congregation of Holy Cross, with a B.B.A. in 1957. The television program, also known as Donahue, was the first talk show format that included audience participation.

He has five children from his first marriage namely Kevin, Daniel, Mary Rose, James, and Michael.

Thomas was a guest on The Phil Donahue Show in 1977 whose host is Phil. They talked about the success of married life and the questions via her social media sites. Soon after three years of this interview, they were married.

He is regarded as one of the most influential talk show hosts. He is considered as the "king of daytime talk".

In the 1980s, his show was the first one to reveal child molestation by Catholic priests.

Donahue's first marriage ended in divorce after seventeen years of their togetherness. The actual cause is still unknown.

Phil Donahue married actress Marlo Thomas daughter of Danny Thomas on May 21, 1980. Its been so long and they are still married. The sweet couple have a lot things in come including their profession.

He is the first child among the five. The couple welcomed him soon after their marriage.

The second son, the couple was blessed with.

The third child and the first daughter to this family.

The couple were blessed with this beautiful daughter as the second daughter to this family.

He died of an aortic aneurysm at the age of 51. Jim Donahue lived and practiced law in Honolulu, at the time of his death.