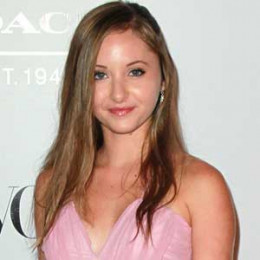 An American teen actress and singer, Rachel Giana Fox, is better known by ABC series, Desperate Housewives as Kayla Huntington. Besides, acting she was also as a lead singer and rhythm guitar player for two bands, playing songs by Led Zeppelin, Rolling Stones, Muse, My Chemical Romance and much more. She was nominated for various awards including- Young Artist Award, Screen Actors Guild Awards for her role in Desperate Housewives.

Rachel was born on 23rd July 1996 in Lawrenceville, Georgia. She with her family moved to Westlake, Ohio when she was only 4. Fox grew up along with her sister.

After moving to Ohio, she was admitted to a theater program by her mother and sister to improve her speaking capacity in public.  She graduated from Chaminade College Preparatory.

After certain months in the camp, she later did several commercials and print work in Ohio representing The Docherty Agency and Ford Modeling Agency. Later on, Fox appeared in That's So Raven, a hit Disney TV series with the role of Buffy. She also made a guest appearance in Passions and Hannah Montana starring Miley Cyrus.

Moreover, she gave her voice in Ant Bully and Thrillville, a video game. In 2006 she also worked in Desperate Housewives, an ABC hot show by Marc Cherry with the role of Lynette's sociopath step-daughter.

In 2010, Rachel made her movie debut with Spork as a lead role and also appeared in Jim Sheridan's Dream House. Furthermore, she was cast in Vice Uncensored starring Michael Chiklis and Elizabeth Perkins. She also featured in Melissa & Joey, an ABC Family sitcom along with Nick Robinson.

The beautiful Rachel's personal life is the matter of curiosity for each of her fans. She is dating Jimmy Bennett, an actor famous for Daddy Day Care since April 2012. Well, the pair seem to be in a healthy relationship as no rumors about their breakup has surfaced yet.

Fox has an estimated net worth of $0.1 million which she earned from the TV series and movies including the commercials. At the very early age she did several commercials and in print for American Greetings, Target and Joann Fabrics. She also worked in the Lite Hosue Pools and Spas Tv commercial and various regional commercials as well.