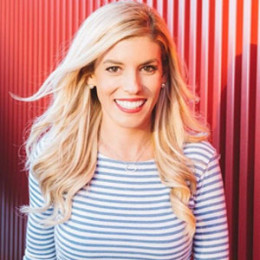 Rebecca Zamolo is a writer, Youtube star, and actress who is a hardcore gymnast. She has starred in web series “The Mumblesteens” and “The Flip Side.” She is also known for her improvising skills as a recurring performer on The Late Late Show with Craig Ferguson in 2010.

The early life of Rebecca Zamolo

Rebecca Zamolo was born to father Paul Zamolo and mother Cathy Zamolo, grew up with her brother Michael and sister Jennifer and Monica.

Becca completed her Mass Communication and Sports Management from University of California, Santa Barbara College. She started gymnastics at the age of 9 and has won the regional as well as national level title as a gymnast. Rebecca had appeared in some Commercials while she was cheerleading professionally.

Also, see the biography of; Debbie Gibson and Rachel Boston

She started gymnastics at the age of 9 and has won the regional as well as national level title as a gymnast. Rebecca had appeared in some Commercials while she was cheerleading professionally.

Rebecca was interested in acting when she was in college and decided to take action when she moved to Los Angeles. She created her own content and did improvised comedy in “The Second City” then joined a troupe as well.

She was a regular actor in “The Late Show with Craig Ferguson” in the year 2010, and since then her career rose to another level. Rebecca also worked with well-known people in the industry like Jermaine Clement, Brain McKnight, Dean Norris and much more.

She is also a Musical.Ly star has over 2.1 million followers. Zamolo is also on YouTube and has about 1.1 million subscribers. She shares a lot of insane contents which is incredibly hilarious.

Rebecca is married to Matt Yoakum who is popularly known as Matt Slays. The couple got married in 2014 and are very living their happy life in Los Angeles along with their pet dogs-Peanut and Blackjack.

The lovebirds dated for ten years after getting together in August 2002. They exchanged their vows on 17 May 2014. Apparently, they don’t have any children on this date. There are no rumors on any of their extra-marital affairs and divorce.

Her multiple profession helped her gain and maintain her net worth of $3.2 million.

Matt Yoakum, famously known as Matt Slays is a lyricist, songwriter and music producer who work alongside Joshua David Evans. He is the husband of Rebecca Zamolo. The pair dated for 10 years after they met in 2002.