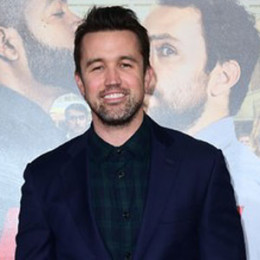 Robert McElhenney is an American director, producer, screenwriter, and actor, well recognized for his role as Mac on the FX/FXX comedy series ' It's Always Sunny in Philadelphia.'

At the age of 8, his parents got separated after knowing that his mother opened up about being lesbian. Later he was raised by his father, but he said that both his parents stayed as friends even after the divorce.

He also has a younger half-sister from his father's second wife. He joined Saint Joseph Preparatory School in Philadelphia. After his graduation, he shifted to New York City. He attended various courses at Fordham University and even stayed on the campus with friends, but later, chose not to join.

Rob McElhenney made debut with a small role in the movie The Devil's Own, followed by other minor roles in Wonder Boys, A Civil Action, and Thirteen Conversations About One Thing. However, her part in Wonder Boy and The Devil's Own were cut out in the final review.

Later, he landed more significant parts in The Tollbooth and Latter Days, also a small role in the Law & Order. At the age of 21, he wrote his first script, it was on the way to be directed, but later after a year of edits and rewrite, it fell through.

He then shifted to Los Angeles, at his age 22. He got several offers, for many stations. However, McElhenney chose to sign in with FX as they allowed him creative freedom.

He signed with FX as the showrunner for Its Always in Sunny in Philadelphia. He met co-star Glenn Howerton through his agent, and Charlie Day, while shooting for a horror movie in New York. Both Day and Howerton were listed as executive producers.

Despite, spending fifty weeks of every year, what he claims takes in producing, acting, and writing for the show. He did, however, find time to make his appearance in the third season of Lost in the episode Not in Portland. It led to him meeting the co-creator of Lost and executive producer, Damon Lindelof, and McElhenney.

McElhenney is also a big fan of Game of Thrones and was elated that the series' writers asked to write an episode of 'It Always Sunny in Philadelphia. He and co-producers agreed to the offer.

On 21 July 2015, McElhenney was appointed as the director of movie Minecraft, as confirmed by Mojang. In 2017, he made a guest appearance in the acclaimed Fargo episode The Law of Non-Contradiction. He also received positive reviews for his credit from critics, who watched his portrayal as a reference to 'It's Always Sunny in Philadelphia.'

Just before the first season of Its Always in Sunny in Philadelphia went into production, the actor and producer of the series hired Kaitlin Olson, for the role of Dee Reynolds.

Later, McElhenney developed more than a professional interest in Kaitlin Olson, during 'season 2' of the series. On 27 September 2008, The popular actor and producer married Kaitlin Olson.

During the preparation for the 'season 7' of Its Always Sunny in Philadelphia, Rob McElhenney gained 50lbs of extra weight and grew his beard long, for his role, and added a new comedic script for the season.

McElhenney's co-star Charlie Day explained about gaining weight as ''disgusting'', and said that the remaining other members were ''a little on the fence about it for his own personal health and safety.''

He is also known as first cousins who share paternal grandparents with, attorney, activist, and Olympic medalist, Marcus N. McElhenney.

Rob McElhenney earns a decent sum from his multiple profession. As of 2017, he has an estimated net worth of $40 million. One of his most watched show in which he has portrayed and served as an executive producer too, It's Always Sunny in Philadelphia, had a budget amount around $ 88,000, whereas the current budget amount of the series is $ 1.5 million.

Recently, the creator, producer, and actor of Its Always Sunny in Philadelphia, McElhenney's house is on sale for $2.675 million after first listing it for $ 2.74 million. He bought the house first for $2.1 million in 2008.
The house includes a half bathroom, four bedrooms, with 4,000 square foot, and two-story shelter featuring high ceilings.

Rob McElhenney met Kaitlin Olson for the first time during the shoot for Its Always Sunny in Philadelphia.

Axel Lee is the first son of Rob McElhenney and Kaitlin McElhenney.

He is the second child of the couple, born on 5th April