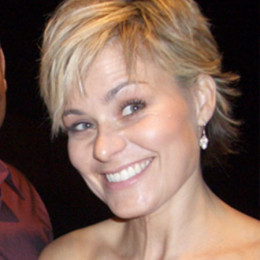 American actress, Robin Stapler is famous for her roles in television programs like Star Trek: Voyager, Martin, and Beyond Belief: Fact or Fiction. The Hollywood actress, however, caught major public attention after marrying the popular acting sensation Alfonso Ribeiro.

Is Robin Stapler Moved on with someone?

Robin Stapler is possibly single as of now, she's not heard of being in a relationship or hanging out with other men. At present, Stapler is probably looking for the man of her kind. She is still struggling with her life and currently raising her daughter as a single mother.

But, her ex-spouse, Alfonso Ribeiro has moved on with someone special in his life. The Fresh Prince of Bel-Air star is married to Angela Unkrich since 2012.

And, the newly wed duo most recently celebrated their sixth anniversary in 2019. Ribeiro and Unkrich are blessed with three kids- sons Alfonso Jr. Anders and daughter Ava.

The former actress prefers to live a low-key life and rarely seen in any events and programs post her split from the television director Alfonso. They remained in a conjugal relationship for five years.

Nevertheless, their child Sienna Ribeiro is frequently seen with her father and step-brothers on PDA. While Stapler is struggling in her career her ex-partner Alfonso is living a blissful life with his other lady love Angela.

Robin was previously married to the famous television actor Alfonso Ribeiro to whom she first met in 1999. They officially kindled romance since 2001 and after knowing one another they took relationship into the next level. The duo shared the wedding vows on the 20th of January of 2002 in a private ceremony.

At the initial phase of their marital life, they seem compatible but as time passes, their personal differences started hitting their relationship. As a result, the couple decided to divorce in August 2006 after 5 years of marriage. The divorce was finalized on 19th February 2007.

In addition, Robin and her ex-husband shared a 13-year-old daughter, Sienna Ribeiro who was born on 7 October 2002. Sienna is a popular internet sensation famous for her dancing and lip-syncing skills in TikTok. Furthermore, Robin and her husband have joint custody over their daughter.

After divorcing, Robin, Alfonso tied a knot with Angela Unkrich on 13th October 2012 followed by a three-month-long engagement. They said "I do" in a Golf club at Lakeside Golf Club in Burbank, California. The couple shares three children two sons Alfonso Lincoln Ribeiro Jr., Anders Reyn Ribeiro, and a daughter. Alfonso and his present spouse welcomed their third kid in May 2019. As of January 2020, the family of five resides in Los Angeles, California.

What is the Net Worth Robin Stapler?

Robin Stapler's estimated net worth is somewhere $300,000 out of which most of the money comes from her acting career. She is believed to have a salary of $10,000-$15,000 from her television appearances.

Stapler worked in various American famous TV series like Star Trek: Voyager, Martin, and Beyond Belief: Fact or Fiction. She was praised for her roles in those television series and garnered both love and support from her fans.

Stapler's ex-husband, Alfonso is a famous American celebrity and holds an impressive net worth of $7 million. The Hollywood actor is now living his life with his new wife Angela Ukraine in their home in Granda hills which has the market price of $1,937,500.

be sure to check out Marriedwiki.com for more biographies!!

Robin was married to the famous television actor Alfonso Ribeiro. The duo shared the wedding vows on the 20th January of 2002 in a private ceremony among their friends and family.

Robin and her ex-husband Alfonso Ribeiro share one daughter mutually named Sienna Ribeiro who was born on 7 October 2002.