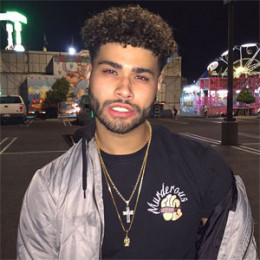 American Vine and YouTube Star, Ronnie Banks posted his first video in Vine in 2013 and attained more than 2 million followers. Banks also has two YouTube channels from where he grabbed much of the fame and money. Besides his career, he is engaged to his longtime girlfriend and has a child with her.

Ronnie Banks was born on 20th October 1997 in Oakland, California under the birth sign Libra. Banks is American as per nationality, and as far as his ethnicity is concerned, he is of mixed race (part Pilipino and part black). His parents raised him with his younger sister.

After his high school, he graduated from the University of Missouri-St. Louis in St. Louis County, Missouri.

Ronnie Banks on 2nd May 2013, posted his first video in Vine titled 'First Vine.' From the day he has been active in the world of social media. After posting several videos, he eventually, gained more than millions of followers in his Vine account.

In the same year, Banks created a self-titled YouTube channel. The channel has more than 38 subscribers, but recently he stopped posting videos on this channel as he opened up another channel with the name, BANKS Family.

Being an internet sensation, Banks is also a good musician. He performed with several music artists and even at Scream Jam in 2014.

Besides this, he also appeared in the 9th season of Criminal Minds in one of the episodes alongside the stars Shemar Moore, Matthew Gray Gubler, Thomas Gibson, A.J. Cook and Kristen Vangness among others.

Ronnie Banks, the YouTube sensation got engaged with his longtime girlfriend turned fiancé, Jasmine Villegas in 2016. The couple started dating after meeting for the first time in 2014 while shooting for the music video, That’s Me Right There.’’

Banks’ fiancé is American R&B and pop singer known for her appearance in Justin Bieber’s music video, Baby. In 2016, the couple welcomed their first child named, Ameera Reign who also appeared in several videos posted by them on YouTube.

Before the birth of their daughter, the pair split for some months and came together after the news of Villegas’ pregnancy.

Moving on, Banks collected $10.7k -$171.5k from his YouTube channel, BANKS Family. With such earning, Banks owns a BMW 3 series worth $51k, and his partner owns a Lamborghini priced $200k and Bentley costing around $180k.

Ameera Reign Eloise Hackett is the first child of Ronnie Banks and Jasmine Villegas in February 2016. She is currently a year and is in every video of them on YouTube.