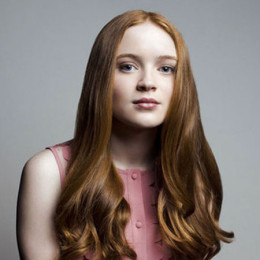 Young American actress, Sadie Sink is rising in Hollywood, well known for her role of "Max Mayfield" in the fantasy horror series "Stranger Things", Unlike the main casts including Millie Bobby Brown, David Harbour, Gaten Matarazzo, Winona Ryder and Finn Wolfhard, she hit the screens on the second season of the show, landing herself a nomination in Screen Actors Guild Awards for her Outstanding Performance in a drama series on 2018.

Sink started her career as a Broadway star when she bagged herself a role in Annie when she was just 11. The 15-year-old actress is gaining hype over the industry and already on her way to establish herself as one of the promising actresses in Hollywood

Sadie Sink was born on 16 April 2002 in Brenham, Texas, the U.S. Her father is a well known American football coach and a math teacher while her mother is a housewife. She has three older brothers, Mitchell Sink, Spencer Sink, Caleb Sink and one younger sister Jaci Joy.

Sink was obsessed with acting from her early age and she even recreated High School Musical, the famous Disney movie with her brother, Mitchell that influenced her mother to send her to take the acting classes in a community theatre. After much learning and dedication, she landed herself a Broadway audition and big role in 2012 musical Broadway revival of Annie. Sadie even took dancing classes and vocal training for the play.

Sadie Sink stared her career from the early age of 12 after appearing in TV series. After the performance in 2012 revival of Annie, she acted in the Emmy-winning series The Americans by Joseph Weisberg in the leading role as Lana. Following this, she co-starred with veteran actress Helen Mirren playing young Queen Elizabeth in the British playwright, The Audience.

She did her movie debut from the film The Bleeder but she was recognized on screen from the movies, Chuck and The Glass Castle.

She rose to fame after starring in the second season of Netflix original, Stranger Things, portraying the role of "Maxine/Max" in 2017. She's all set to star in the upcoming horror movie, "Eli" starring Charlie Shotwell that will be released in the year 2019.

American teen actress Sadie Sink is living a luxurious life and she has an estimated net worth of $300 thousand. She's also one of the rising young actresses in the Hollywood.

Sadie was paid $23,625 per episode of Stranger Things II, as per the contract documents given to them. She was also recently featured in the Nike, Choose Go- Feature advertisement along with Nike endorsers Kevin Hart, Simone Biles, Kobe Bryant, Odell Beckham Jr., hence she's also endorsing for the billion dollar worth sports company, Nike.

Sadie Sink is single at present as she is too young to have a boyfriend. She is active on social media sites including Twitter and Instagram since 2014. Till now, she has more than 3m followers on Instagram and 300k followers on Twitter. She keeps uploading the pictures on her Instagram usually with her younger sister Jacey and with her friends.