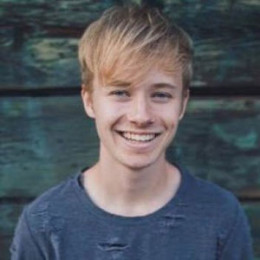 Sam Golbach is a popular Vine star who has garnered more than 290K subscribers in the self-entitled channel. He also is a YouTube personality who gained the fame from the Vine account, Sam and Colby. The talented young star Sam is in a romantic relationship with his high school girlfriend Katrina.

Sam Golbach born on November 27, 1996, in Kansas grew up along with his older sister, Allison and younger brother, Ben.

Sam began his career making videos on Vine with his friend Colby Brock. They together formed an account, Sam, and Colby. They then did the live broadcasts via the network YouNow. Their account consistently gained the popularity with the followers reaching more than 1.6 million.

Later on, Sam made a self-titled channel on YouTube which now has 300k subscribers and total of 19 million views. His most watched videos include WAKING ROOMMATE UP IN A POOL | PRANK WARS, STOLEN CAR PRANK ON BOYFRIEND and THE MIDNIGHT GAME // 3 AM CHALLENGE. Besides that, he has also made his appearance in movies like Achterbaks and FML.

The 20-year-old Vine star Golbach is currently dating his long time girlfriend Katrina. Sam and Katrina Stuart together since their college days and still seem to share a strong bond.

Sam earns a decent amount as a rising star. His net worth is possibly counted in thousands. His personal Twitter account has over 100,000 followers.