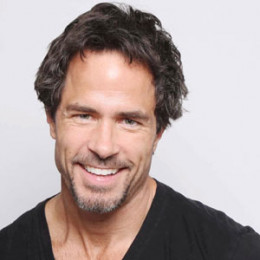 Shawn Christian is an actor most recognized for his portrayal as Dr. Daniel Jonas in the soap opera Days of Our Lives. He also appeared in TV series As the World Turns. Shawn is dating actress Arianne Zucker since 2014.

Shawn Christian was born on December 18, 1965, as Shawn Patrick Christian. He is from Grand Rapids Michigan, USA.

After completing his high school education from Rogers High School, Wyoming, Michigan he enrolled at Ferris St. University in Big Rapids, Michigan. IN 1989 he graduated majoring in marketing.

Shawn moved to Chicago to begin his career starring in commercials and stage productions working with the company Improv Olympic. He was cast as the first male spokesman in 1994 in the reality show Star Search.

He then featured in an array of TV series including As the World Turns in 1994, Summerland in 2004, and Venice in 2010. His name and fame rose up after acting in the soap opera Days of Our Lives in 2008 as Dr. Daniel Jonas.

Afterward, Christian appeared in TV series Pacific Palisades, Wind On Water, Charmed, Beverly Hills and many others with the recurring role. In 1996 he was nominated for Hottest Male Star in a Soap Opera Digest Award.

The 52-year-old actor Shawn was previously married to Deborah Quinn.  They tied the knot on 18 May 1996.

The former partners met while working as models auditioning for print in Chicago. They divorced formally in 2013. He has a son named Kameron from his ex-wife and adopted step-daughter Taylor Quinn Cole.

Currently, Shawn's current girlfriend is his former co-star of Days Of Our Lives Arianne Zucker. The lovebirds started dating since 2014. They are often seen hanging out and share pictures on the social media.

The handsome actor Christian is well paid from his career due to which he has accumulated an estimated net worth of $4 million.

Actor Shawn Christian married Deborah Quinn in 1996. He met his ex-wife Deborah while modeling in Chicago. The duo divorced in 2013.

Kameron is the only son of the actor, Shawn Christian from his ex-wife Deborah Quinn. He was born on July 2000.

Taylor Quinn Cole is the adopted daughter of actor Shawn Christain and his ex-wife, Deborah Quinn. They adopted her as their second child.