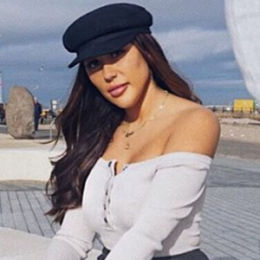 English actress, Sophie Kasaei began her career from the MTV UK reality TV show, Geordie Shore and gained fame from the show. She was taken off the show briefly for a statement she made about Afro-American people.

Sophie Kasaei was born Sophie Zarie Kasaie on 8th November 1989 in South Shields, Tyne and Wear, England under the birth sign Scorpio. Kasaei’s father, Keivan Kasaei raised her with her DJ brother. She is English as per nationality, and as far as her ethnicity is concerned, she is half Iranian.

Sophie Kasaei came to limelight from the MTV British reality show, Geordie Shore. She was part of the show along with members Scott Timlin, Gaz Beadle, Charlotte Crosby, Vicky Pattison, Holly Hagen, Elettra Miura Lamborghini and Ricci Guarnaccio among others.

Kasaei earned much of the fame from the series as well as fan following. She was the regular cast of the show until the 7th series. Later Kasaei was kicked out of the show and was replaced by Marnie Simpson after making a racist comment,

Three years later, Kasaei was again cast in the series, but rumors flew about her being kicked out for the second time for getting into a fight with the new girl, Zahida Allen. However, Kasaei addressed the rumors as false.

Sophie Kasaei was in a relationship with her DJ boyfriend, Joel Corry from 2012. The pair began dating each other after meeting for the first time in MTV when Corry was working there as an intern. During their five-year relationship, they accused each other of cheating multiple times and even broke up many times.

Their most recent break up was in 2017. Till now they have not revealed the exact reason for the separation. However, after the breakup, Kasaei cleared about giving time to herself. She said,

Currently, Kasaei posted several pictures with her co-star from Geordie Shore, Nathan Henry. The couple might be in a relationship but so far has not yet disclosed anything related to it. She is possibly single at present.

Kasaei underwent an emergency surgery to remove an infected abscess from her bum. She managed to lose 14 pounds and made an amazing transformation.

Sophie Kasaei, 28, debuted from the Geordie Shore presently has an estimated net worth of $1 million as per some of the online sources.

Gaz Beadle, one of the casts of Geordie Shore earned about $47k to $53k from the show. Kasaei's exact salary from the show is not public, but she also must have made somewhere the same figure.

Kasaei is the owner of Off the Rails Boutique and a partner of Motives Cosmetics, other sources of her income.