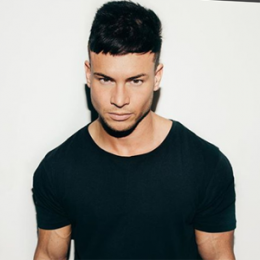 Joel Corry, British bodybuilder, fitness model, and a DJ has won several championships related to fitness. He trained hard to make such a fantastic physique. Corry is single currently after a recent break up with his former reality star girlfriend.

Joel Corry was born on 10th June 1989 in England under the birth sign Gemini. Corry is British, and as far as his ethnicity is concerned, he is White.

Joel Corry from the very early age was interested in fitness, inspired by his tennis instructor father. He used to spend much of the time in the gym and was known as ‘’the guy with the six-pack'' during his school days.

By 2016, he had a great physique, one of his most significant achievement. He also appeared as a fitness model and a DJ at night. Later, he appeared in the MTV reality show, Geordie Shore with casts, Scott Timlin, Gaz Beadle, Charlotte Crosby, Vicky Pattison and Holly Hagan among others.

Joel Corry was in a relationship with Sophie Kasaei, a reality TV star. The pair started dating in 2012 after meeting for the first time in MTV when Corry was working as an intern. They both were accused of multiple cheating and broke-up many times, but somehow they find their ways to be together.

The pair also appeared in the show, Just Tattoo of Us hosted by Stephen Bear and Charlotte Crosby with Ashley Cain, Jesse Impiazzi, and Chloe Khan. After dating for almost five years, the couple broke up. He is currently single.

Corry loves to spend most of his time in the gym and follows a strict diet plan to maintain his physique.

Joel Corry, 28, has an estimated net worth of $50 thousand as per some online sources. However, the exact amount is not yet officially confirmed.

One of the casts of Geordie Shore, Gaz Beadle earned about $47k to $53k from the show. Corry was also a part of the show briefly. He may not have got paid the same amount but somewhere the same figure. He also owns a custom Range Rover worth $71,645.