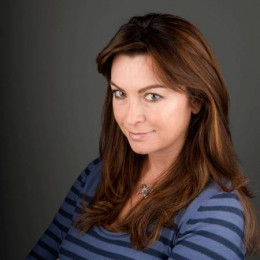 She is a British television presenter and motor sports correspondent known for her coverage on The Gadget Show on Channel 5, MotoGP for the BBC News and the BBC's Formula One. She studied business studies and finance at Wolverhampton Polytechnic which is now named University of Wolverhampton. After graduation she spent one year in Japan working as a model and later as an advertising model.

Suzi Perry was born on May 3, 1970, in Cosford, Shropshire, England. She attended Smestow school in Wolverhampton.

Suzi Perry is best known for her association with BBC News. She was the original presenter of Live Elite League Speedway on Sky Sports.

Suzi Perry is happily married to Bastien Boosten since 2009. Previously was married to Steve Bullock, a model from Sheffield, for four years and divorced.

Suzi Perry possesses an estimated net worth of $5 million.

He is professional model from Sheffield. The couple were together for four years and then got separated.

They first met while filming The Gadget Show whilst driving a personal submarine. She is the first celebrity bride to post her wedding photos on Twitter.